What others are saying about Naomi and the Sister from Below

What Others are saying about Naomi Lowinsky and the Sister from Below:

“Naomi Lowinsky has given us a remarkable, fearless, and full autobiography. Speaking in poetic, psychologically sensitive, scholarly dialogues with her shape-shifting muse, she has created a new form . . . This is a beautiful book to treasure and spread among worthy friends.”

—Sylvia Perera, Author of Descent to the Goddess and Celtic Queen Maeve and Addiction.

“. . . Naomi Ruth Lowinsky offers us a superbly detailed investigation of the powerful, mythic forces of the world as they are revealed to the active creative self. Don’t miss this enlightening and fascinating book.”
—David St. John, Author of Study for the World’s Body: New and Selected Poems and Prism.


“Naomi’s poetry and prose is infused with the suffering and joys of humans everywhere. Insightful and deeply moving, she brings us the food and water of life.”
—Joan Chodorow, Author of Dance Therapy and Depth Psychology, Editor of C.G. Jung on Active Imagination.


“A passionate love letter to those who yearn to be heard. A must read for every woman who longs to write poetry.”
—Maureen Murdock, Author of The Heroine’s Journey and Unreliable Truth: On Memoir and Memory.


“Naomi Ruth Lowinsky reinterprets mythic and historical reality in provocative versions of the stories of Eurydice, Helen, Ruth, Naomi, and Sappho. The voice of the Sister from Below argues, cajoles, prods, explains, and yes, loves her human counterpart, and becomes the inspiration for Lowinsky’s stunning poetry in this highly original book.”
—Betty de Shong Meador, Author of Inanna, Lady of Largest Heart and Princess, Priestess, Poet.

The Sister from Below is a personal story, yet universal, of giving up a creative calling because of life’s obligations, and being called back to it in later life. This Fisher King Press publication describes the intricate patterns of a rich inner life; it is a traveler’s memoir, with outer journeys to Italy, India and a Neolithic cave in Bulgaria, and inward journeys to biblical Canaan and Sappho’s Greece; it is filled with mythic experience, a poet’s story told. The Sister conveys the lived experience of the creative life, a life in which active imagination—the technique of engaging with inner figures—is an essential practice.


The Sister speaks to all those who want to tab into their creative source and fulfill an unlived promise—those on a spiritual path, those who are filled with the urgency of poems that have to be written, paintings that must be painted, journeys that yearn to be taken…


In addition to The Sister from Below: When the Muse Gets Her Way and The Motherline: Every Woman’s Journey to Find Her Female Roots, Naomi Ruth Lowinsky is the author of numerous prose essays, many of which have been published in Psychological Perspectives and The Jung Journal. She has had poetry published in many literary magazines and anthologies, among them After Shocks: The Poetry of Recovery, Weber Studies, Rattle, Atlanta Review, Tiferet and Runes. Her two poetry collections, red clay is talking (2000) and crimes of the dreamer (2005) were published by Scarlet Tanager Books. Naomi is a Jungian analyst in private practice and poetry and fiction editor of Psychological Perspectives.


Naomi has recently been awarded first prize in the Obama Millennium contest for her poem “Madelyn Dunham, Passing On” in which she imagines the spirit of Obama’s deceased grandmother visiting him as he speaks to the crowds in Chicago after his election. The poem will be published in the literary magazine New Millennium Writings this fall. To learn more about Naomi Ruth Lowinsky and her many publications visit www.sisterfrombelow.com


The Sister from Below:When the Muse Gets Her Way
—ISBN 978-0-9810344-2-3
Published by and available for purchase directly from Fisher King Press.
Also available from your local bookstore, and a host of on-line booksellers.
Publication Date: June 1st, 2009

A Day with Noami Lowinsky and The Muse 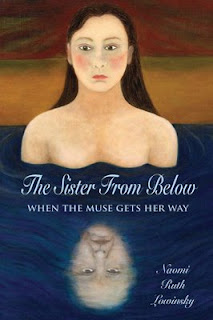 "A Day with Your Muse"
Presented by: Naomi Ruth Lowinsky
Saturday, June 13th, 2009 at the
C.G. Jung Institute San Francisco


"A Day with Your Muse" is a day-long workshop in which Naomi Lowinsky will present material from her book, and lead a writing workshop to help people get in touch with their inner "Sister from Below."

The "Sister from Below" is a fierce inner figure. She emerges out of reverie, dream, a fleeting memory, a difficult emotion—she is the moment of inspiration—the muse.

This Sister is not about the ordinary business of life: work, shopping, making dinner. She speaks from other realms. If you'll allow, She'll whisper in your ear, lead your thoughts astray, fill you with strange yearnings, get you hot and bothered, send you off on some wild goose chase of a daydream, eat up hours of your time. She's a siren, a seductress, a shape-shifter . . . Why listen to such a troublemaker? Because She is essential to the creative process: She holds the keys to the doors of our imaginations and deeper life—the evolution of Soul.

Naomi Lowinsky, MFT, is an analyst member of the C. G. Jung Institute of San Francisco. She is the recent recipient of the Obama Millennium Poetry awarded for "Madelyn Dunham, Passing On.” Her most recent publication, The Sister From Below: When the Muse Gets Her Way (ISBN 9780981034423) has just been published by Fisher King Press. A reprinted edition of The Motherline: Every Woman's Journey to Find Her Female Roots (ISBN 9780981034461) has also just been published by Fisher King Press. She has had poetry published in many literary magazines and anthologies in addition to her two poetry collections, red clay is talking (2000) and crimes of the dreamer (2005). She has a private practice in Berkeley.

Reserve for this event
Posted by Fisher King Press at 2:20 PM 0 comments