Owl as Muse and Medicine

Haven’t you stood . . . naked
in the gaze of the Great Horned One?
—Naomi Ruth Lowinsky 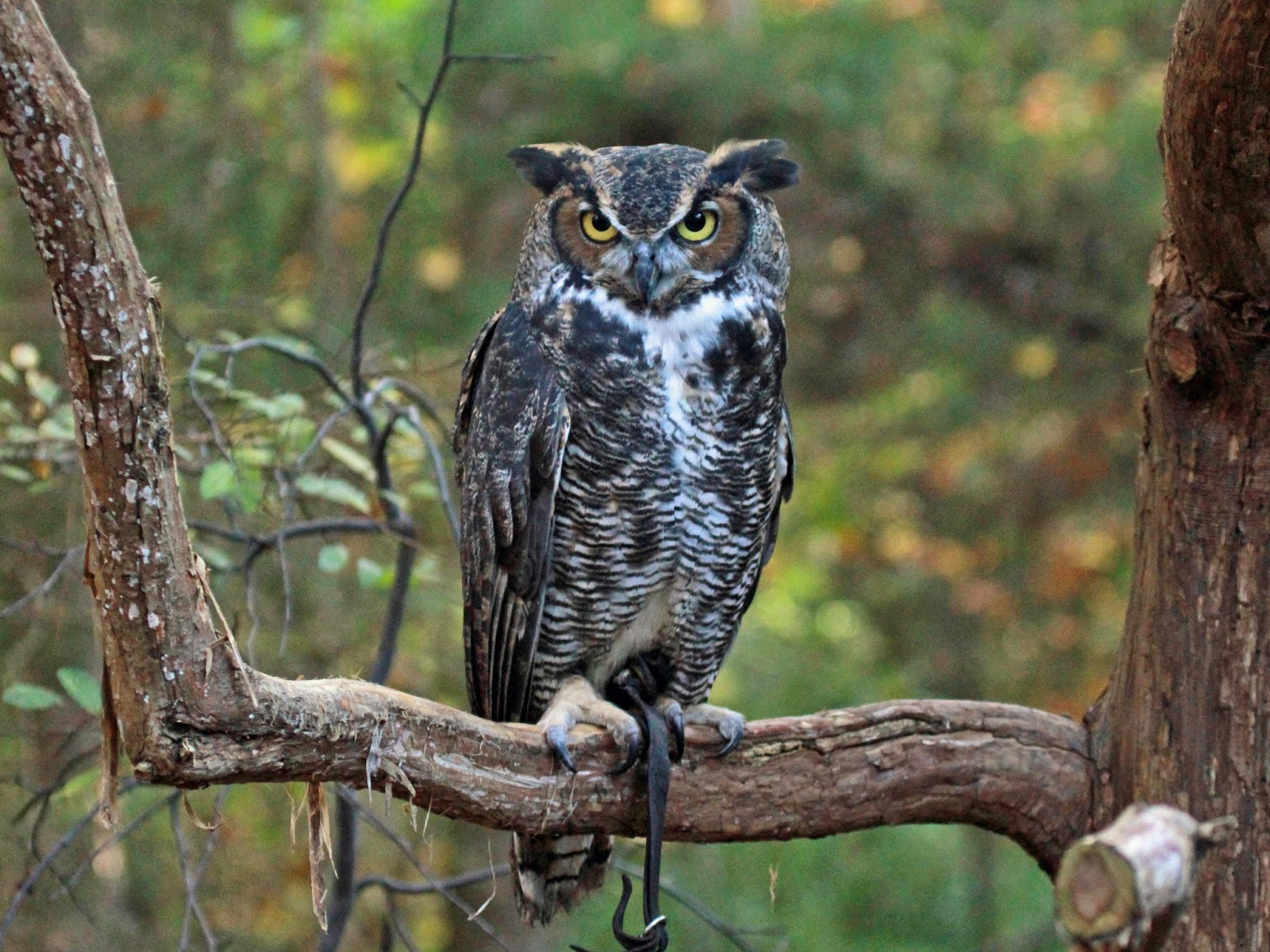 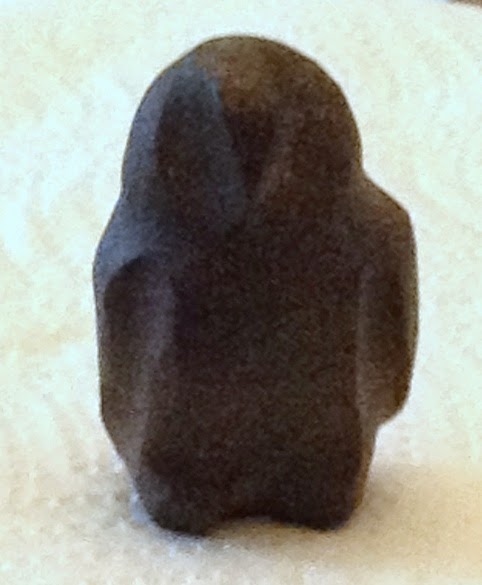 Dan gave me an owl carved of black rock by a Cochiti Pueblo Indian. It fits perfectly in my hand, just the size of my palm, like those little clay goddesses ancient women held onto when in labor. It is clearly carved by a master—a few deft strokes release the spirit of owl within. I hold the owl in my hand while I meditate. It is good medicine. It calms me, reminds me it is my totem. When I go off into catastrophic thoughts about climate change and fractured ecosystems, about melting glaciers and loss of species, owl speaks to me. Owl, after all, not only sees in the dark, owl knows how to live in the dark.

If human hands can find my spirit in a rock, then human hands can remember what they knew in ancient time, about healing Mother Earth, cultivating her creatures, bringing people back to their senses.

Owl revealed himself as my totem after Dan and I moved from a big urban home, where we had lived with our children, to a house on a ridge for just the two of us. The experience of living in that house cracked open my citified consciousness. It taught me the ways of the sun as it moved from summer to winter and back. It gave me a bird’s eye view of the fog flowing over the Berkeley Oakland hills. Trees were our companions, hawks and falcons. Once an eagle visited with me, sitting on a nearby power pole. I dropped down to my essential nature as a poet in that house. My inner life opened and my Muse began to speak. At night we often woke to the uncanny sound of owls calling across the valley. One night I saw him, the Great Horned One, perched on a corner of our roof. Ordinary consciousness cracked open and I was in the ruthless grip of that raptor’s fierce gaze.

The time came when we had to leave that house. It was too expensive to maintain and not fit for aging joints. The house had a hard time letting me go. It spoke to me in a poem:

Lament of the House

Haven’t I stroked you with fingers of light?
Haven’t I gentled your eyes?
Haven’t I filled you to brimming
with the green world?     How it goes
golden and brown     How it loses

its leaves and goes bare?    Haven’t I shown you
the setting sun     streaked
purple and orange
while white fog     like sea foam
flows over the western hills?

Haven’t you stood on my deck
poured red wine on the earth
said praises?     Haven’t I held
your clay goddesses     your dancing
Ganesha     your Zuni frogs?

How can you tear me apart     empty me out
get me staged to be god knows whose
fantasy house on a ridge?     I who’ve been source
of your source     sacred seat
as clouds form     hawks dive

Haven’t you sat     on that old yellow chair     visited
by poetry?     Haven’t you stood in me     naked
in the gaze of the great horned one?
Will you send your gods into exile
in cardboard boxes?     Will the soles of your feet be gone
from my spiral stairs?

Where will your enthusiasms go     your wrestling
angels     your love cries?     “Nasty” you called me
when I thrust that redwood splinter under your nail
How else can I say it? You and I
are inside one another


That house and the Great Horned One, are in me still. Owl medicine speaks to me in the townhouse I’ve come to love.

We have lost our sense of unitary reality, our experience of identity and of
the sympathy of all things, and as a result we have fallen into solitude of a
dead and empty cosmic space.
—Erich Neumann

My stone owl is a creation of a kind of participation mystique, the radical empathy of a maker who can see owl emerging out of rock. This requires a profound “at oneness” with the natural world. A new book of essays from Fisher King Press takes on this rich topic. Shared Realities: Participation Mystique and Beyond is edited by Mark Winborn. On its cover is a powerful painting by Susan Bostrom–Wong of the San Francisco Jung Institute. Winborn has given us many gifts in this volume, not the least of which is the above quote by Neumann, which he cites in his Introduction. 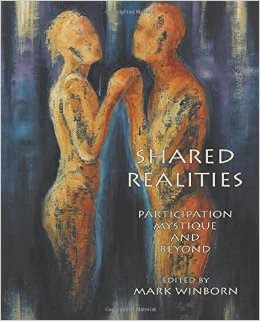 This book helps me wend my way through the confusion of a Jungian conundrum I have long pondered: If we are focused on our own separate path of individuation how do we soften our differentiated edges to feel the pulse of the anima mundi—the world soul? How do we listen to Pachamama—our Mother Earth—and respond to her suffering? How, as climate changes and species disappear, do we deal with our own “solastalgia” (pain caused by the state of one’s home environment), and our collective “nature deficit disorder?”

Jung wrote powerfully about experiences of oneness with the natural world:

At times I feel as if I am spread out all over the
landscape…and am myself living in every tree, in the splashing
of the waves, in the clouds and the animals that
come and go, in the procession of the seasons.

But Jung was deeply conflicted about participation mystique. He understood that western consciousness was limited, and he was influenced by Indian, African and Native American forms of consciousness. Yet he often wrote of participation mystique as a regressive, infantile state in which one is not differentiated from others or from objects in the natural world. This point of view is still dominant in the Jungian world. Jerome Bernstein writes an illuminating essay about this, “Healing Our Split: Participation Mystique and C.G. Jung.” Bernstein argues that despite himself, Jung was trapped in the lens of the Western psyche, its cosmology, its logic, its language. He didn’t understand the world view described by Sioux Indian author Vine Deloria Jr.: “that although the Native feels communion and relationship—even soul connection—with the tree, he does not see himself literally as the tree.”

Bernstein traces Jung’s struggle with this conundrum and his growing recognition of what Native people understand, that we are intertwined with Nature. Jung, after all, was eloquent in his lament of modern culture’s severance from its "primitive" roots. Listen to Jung words:


Man feels himself isolated in the cosmos. He is no longer involved in nature…Thunder is no longer the voice of a god, nor is lightening his avenging missile. No river contains a spirit, no tree means a man’s life, no snake is the embodiment of wisdom, and no mountain harbors a great demon…

Bernstein is graphic about the danger we are in. We are “being threatened with species suicide as a result of over–specialization of our inflated organ of consciousness. Global climate change, weapons of mass destruction, rape and pillaging of the earth as if it didn’t matter…are the result of that creative genius.”

On a writing retreat on Kauai Dianne Braden had a terrifying middle of the night experience that knocked the wind out of her “inflated organ of consciousness” and rendered her as “small as the most vulnerable creature on the forest floor.” She woke to the feeling of a strange presence. In her essay, “Songs Never Heard Before,” she writes:


I was suddenly completely taken up by a strange awareness that there was life teeming out there around me, life that was simple, wild, and on the hunt just outside my window…at least I hoped it was outside…The intensity of this awareness was only outdone by the simultaneous understanding that I was surely losing my mind.

Braden was given a dose of owl medicine. In her powerful essay she tracks the effects of this dose of nature on her life and her clinical practice. She comes to understand that “losing” her mind cracked her open to an experience of participation mystique which revealed new territory in her thinking. She writes:

I was unprepared for…the power of such a “spirit of place,” an energy belonging to the land and its creatures. It’s clear that the spirit of place seeps into consciousness through psychoid gateways opened for us, or left unattended, luring us deeper into the dark tropics of soul.

With Braden, I believe that we need to “lose” our minds, take owl medicine, know we are prey as well as predator, in order to find our way back to our senses, to our place on earth.

Theodore Roethke, the father of ecopsychology, understood that our psyches are organized around a core “ecological unconscious.” So did Jung.


We have increasingly divided our consciousness from the deeper instinctive strata of the human psyche…Fortunately, we have not lost these basic instinctual strata. They remain part of the unconscious, even though they may express themselves only in the form of dream images…

Roethke and Jung show us how to awaken the inherent sense of environmental reciprocity within us. It is our task to bring our native gift for participation mystique to consciousness. One practice to support this is the poet’s path. We write our way back to our senses, to our ecological unconscious. David Abrams, the philosopher and environmentalist, author of The Spell of the Sensuous, understands, as poets do, that poetry reaches down to the carnal nature of language, to the physical ground of our being, through the way “words feel in the mouth or roll off the tongue…—the taste of a word or a phrase, the way it modulates the body…” Poetry, says Abrams, weaves together poet and listener/reader in a sensuous web of mutual experience. Poets are the makers of “wild, living…language.”

Actual, living speech is…a vocal gesticulation wherein the meaning is inseparable from the sound, the shape, and the rhythm of the words…It remains rooted in the sensual dimension of experience born of the body’s native capacity to resonate with other bodies and with the landscape as a whole.

What Abrams understands is that poetry is a kind of participation mystique. The poem, says poet Charles Olson, is “energy transferred from where the poet got it…all the way over to the reader.” Don’t forget, poetry begins with the chant of the shaman. And Owl was the shaman’s familiar.

Owl is a good familiar for an aging poet with an arthritic neck. Owl has a neck than can whirl around and see behind, above, below. Owl can see the big picture, can see other worlds. Owl vision helped with this poem, in which I wrote my way out of my grief for the house on the ridge, and into the wisdom of the ancients:

Well they’d made up their minds to be everywhere because why not.
—W.S. Merwin

home is in a valley
by a river among cottonwoods

(This poem was published in The Book of Now: Poetry for the Rising Tide)

Owl, like any good muse, is a mode of transport. Here is the South Indian version—a yogini riding her owl. She has her fingers in her mouth because she is about to emit an ear splitting shriek. Her name is “She Who Makes A Loud Noise,” rather a good name for any visionary artist riding her night visions. We all need to be making a loud noise speaking for Mother Earth, her creatures and what the ancients knew.


Owl invites you to a daylong writing workshop in the spirit of Owl Medicine: “Wounded Earth, Wounded Psyche,” at the Jung Institute on November 15th 2014.

More News from the Muse

Naomi’s paper “Self Portrait with Ghost: The Art of Lament and Redemption” with glorious photos of her grandmother’s art, taken by Ryan Bush, has just been published in the Jung Journal.

Naomi has two poems in the current issue of Ginosko, online.