The Muse of Lost Homeland

A Letter to my Grandmother

the crystal, the silver fish knives, the music room, the library
the well-tempered Bach, the Hölderin, the Goethe
Buber’s “Legend
of the Baal Shem Tov” who, it is said,

ascended
to the radiance…
—(Lowinsky, “Many Houses Ago” in The Little House with Stilts Remembers)

I write you—
You have come into the world again
with the haunting strength of letters
—Nelly Sachs, in “Glowing Enigmas”

Oma, I have come here for you. You were born here, in 1881, raised here, studied art here. You learned about family, animals, birds, trees, roads, sun, and moon here. You learned your alphabet of colors and the song of your soul here, in this Northern light, where it is fall. It’s getting cold. The young women wrap their necks with colorful shawls; the young men wear leather. You would not recognize this city. 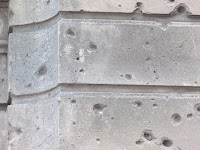 Most of the Berlin you knew was smashed to pieces by the allies in the last months of WWII. Many of the spare, square, renovated buildings preserve a piece of the bombed, bullet riddled past.

Oma, I don’t find Berlin beautiful. I find it exciting, interesting, respectful of its ghosts, full of life in its many forms, the kindness of strangers, ironic graffiti, and shadows from the Soviet and Nazi past. You wouldn’t be moved to paint much here, Oma. There are too few trees. The Old Synagogue is gone. Though you were never a religious Jew you liked to paint interesting buildings. Did you know the New Synagogue, built around the time of your birth? Parts of it survived the war. Other parts were renovated. That old Byzantine style cupola is so lovely. It would stand up well beside the Basilica of San Marco in Venice, where Dan and I just spent some time. The dome appears suddenly, blue and gold and gleaming, exotic in this rectangular city of blacks, browns, whites.


It is, however, painful to get near it. It bristles with metal fences and with security, because Jewish sites in Germany are at such risk of terrorist attacks. So much history here. A “Juden Frei” (Jew free) Berlin was never achieved, Oma, hard as they tried. A small band of survivors, hidden in attics and basements, preserved what they could of Yiddishkeit after the war. But now in this modern city, full of young people, wild night life, students, business people, young women with diamonds in their noses, young men with dreads, we hear that Jews are coming back to where their great grandparents made their lives. It is cheaper to live here than in Tel Aviv or San Francisco. There is an energetic feeling of new life and possibility.

What surprises and moves me deeply is the pull of German—my mother tongue and yours. I never speak it in America, though in recent years surprise myself from time to time by dreaming in German. But here, in Berlin, German pours out of my mouth so effortlessly, from some unconscious spring. And it feels good, “heimatlich—” at home.

We sit in a restaurant in our hotel, in “Die Mitte,”—the middle of Berlin, used to be East Berlin, and hear English, Hebrew, German, Danish, Italian, Turkish. We overhear business meetings, friends sharing confidences, travelers telling stories of the journey, young folk with laptops working on a project in a cozy corner full of books. It is an experience of “Gemeinshaft”—community, and “Gemütlichkeit”—comfort—that would stun you in the city where you saw Hitler staring at you in a café in 1930 and knew, in your intuitive way, that he wanted to kill you and your people.

I’m sure you knew, though I didn’t, that Jews have lived in Berlin—“the place at the end of the swamp”—since 1200 CE. Your maiden name, Osterman, means “from the East.” When did your ancestors come? Were they refugees? So many questions come to me here, in the city of your birth, almost a half century after your death.


We are refugees from that room
with its single bare light bulb
Will our visas ever be granted?
Will our dead know where we’ve gone?
—Lowinsky, “Refuge” first published as “Limbo” in Levure Litteraire

Everywhere people are talking about the refugees flooding Europe. Germany, of all countries, has offered haven for many. Can you believe that, you who fled for your life from Germany? America didn’t want to let you in, didn’t want a flood of Jews. Eventually, after what must have been frightening times crossing borders with false passports, you and your family were given safe haven. Now it’s America that wants to build a wall to keep people out. And here, in the city of the former wall dividing East and West, signs on buses and on walls declare “Alles is Möglich”—everything is possible. That used to be how things felt in America. No more.

The International Herald Tribune is full of the stories of the refugees. How they pass through Turkey, take a boat to Lesbos, just six miles into Greece, hoping to go further North, to Germany, if they’re lucky. How strange that Sappho’s little island has become the main point of entry for Europe. 2000 to 3500 migrants arrive there daily on inflatable rafts. Many don’t make it to safety.


Hungary has closed its borders, built barbed wire fences, tear gassed, water cannoned, beaten, the war terrorized, hungry, exhausted refugees looking for haven. Here we are again, Oma, the dangerous border crossings our family knew in your time—how my father snuck across the border from Germany into Holland in the middle of the night, how my 18 year old mother and her older cousin took the train from Austria to Holland in 1938—when borders were closing—terrified that the cousin’s left wing connections would land them both in detention. In America there are people seeking refuge from dangerous gang riddled countries like Honduras. There are mothers and children, as well as unaccompanied children crossing borders, riding the tops of trains, risking everything to escape the impossible situations behind them, and to find their relatives in America. If they make it to the American border they are held in detention. There are politicians running for president on the promise to keep out the refugees, people like we were, fleeing for our lives. Round it goes, round and round. Where it will stop nobody knows.

There have always been refugees. Exodus and diaspora, go back to the beginnings of human history when our ancestors wandered out of Africa. Did they do so out of curiosity, the urge to explore? Were they driven by conflict or drought? When Dan and I were in Venice I read Jan Morris’ fine book, The World of Venice. She writes:

Venice was founded in misfortune, by refugees driven from their old ways and forced to learn new ones. Scattered colonies of city people, nurtured in all the ease of Rome, now struggled among the dank miasmas of the fenlands…They learnt to build and sail small boats, to master the treacherous tides and shallows of the lagoon, to live on fish and rain–water…

If we are to believe the old chronicles, the foundation of Venice occurred on 25th March 421, at midday exactly.

Are we at the end of one era, entering another, like the ancient Venetians?

O the habitations of death,
Invitingly appointed
For the host who used to be a guest—
—Nellie Sachs in “O the Chimneys”

In Berlin, Oma, it feels different. There are commemorations of the lost Jews all over “Die Mitte.” There are “Stolpersteine—”stumble stones—brass markers embedded in the ground so passersby will stumble over the names of those who lived here and were murdered in concentration camps. There are powerful sculptures, like one by Willie Lammert, called “Frauengruppe,” Group of Women—concentration camp figures emerging out of their nightmare, looking disoriented and gaunt.


There is the Jewish Museum, which was an overwhelming experience for us. The old building, late 19th century, is connected to the new building by an underground passageway. One is forced down, down narrow steps into the dark gray walls and confusing maze of the building by the esteemed architect, Daniel Libeskind, who shaped his creation like a shattered Jewish Star.


One can follow the axis of the Holocaust, the axis of exile, the axis of continuity; there are voids to symbolize the lost fragments of European Jewry. One gets lost, disoriented, exhausted. The Holocaust Tower is a strange dark place, a very high triangle at the apex of which a crack of light is seen. When the heavy door closes behind one it is hard not to panic.

I was particularly taken by exhibits of Jewish family life in Germany before the Second World War, the time during which you were raising your big family, before all the deaths and the horrors. I was amazed to see a beautiful portrait by your teacher and mentor, Lovis Corinth, of his Jewish wife–to–be, Charlotte Berend. The portrait was made in 1902. You would have been twenty-one. I think you were studying with him then. Did you know Charlotte? She was just a year older than you, also a painter and a student of Corinth. I could see his influence on you in the warmth of feeling, the exquisite brushwork, and the feeling of interiority touched by light from without.


There is a sculpture of a table, one standing chair and one chair knocked over, in bronze. It is called “Der Verlassene Raum—” The Forsaken Room—by Karl Biedermann. Around the edges of the work one can read inscribed lines by the great poet of the Shoah, Nelly Sachs— an essential muse to me. Did you know her work? She was born in Berlin, the same year as you were. I’d love to imagine you, Charlotte Berend and Nelly Sachs, lovely young women in a Berlin cafe, talking about your creative lives. What difficult futures lay ahead for you. A quote from Nelly’s poem is: “O ihr Schornsteine, /O ihr Finger, /Und Israels Leib im Rauch durch die Luft! “ O you chimneys/O you fingers? And Israel’s body as smoke through the air!

You can find more poems and stories about my grandmother, Emma Hoffman, in the Summer 2014 Issue of The Jung Journal, V. 8, # 3, in my book of poems, Adagio & Lamentation, and in The Motherline: Every Woman’sJourney to Find Her Female Roots.