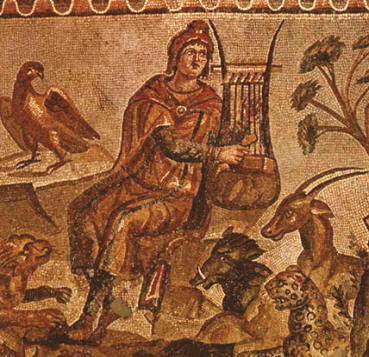 The Girl Who Slept the World


To the poet’s own astonishment, work on the Elegies was both preceded and succeeded by bursts of creative inspiration that birthed another, wholly unanticipated magnum opus. This unlooked–for gift of the gods was Rilke’s Sonnets to Orpheus.
—(Polikoff, Introduction) 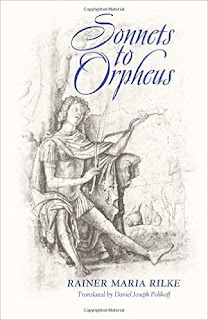 In sad times, when death stalks our kith and our kin, in troubling times, when shocking events overwhelm us—young people are gunned down at a rock concert in Paris, people who serve the developmentally disabled are gunned down at a holiday party in San Bernadino, in frightening times when hatred for the stranger runs rampant and the snarl of fascism stalks the land, there’s no comfort like poetry, especially Rilke’s Sonnets to Orpheus. Rilke wrote his sonnet sequence “as a grave–monument for Vera Ouckama Knoop,” a nineteen year–old dancer who died of leukemia. Rilke’s great work is a temple in the woods, a sanctuary from dread and terror, beautifully rendered into English in a new translation by Daniel Joseph Polikoff, (Angelico Press, 2015)

Polikoff has devoted much of his creative life to Rilke. He has given us his monumental “Soul History,” In the Image of Orpheus: Rilke. I reviewed this book for the Jung Journal in 2012. Appreciating the influence of Jungian thought and James Hillman’s revisioning of it on Polikoff’s work, I wrote: 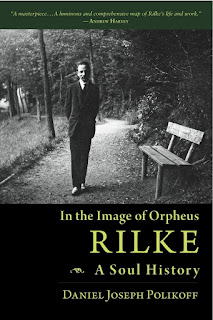 "Polikoff, leaning on Jung, focuses on Rilke’s anima fascinations in life and in poetry, He traces Rilke’s soul development as he separates from Lou Andreas Salome, who has been a maternal figure, and meets the lovely young artists Paula Becker and Clara Westhoff in the bucolic landscape of Worpeswede. Clara would eventually become his wife. Rilke’s understanding of the sacred shifts “away from the name and spirit of God toward the soul of nature experienced in and through the eyes of two enchanting maiden-artists” (208). Following Hillman, Polikoff understands the power of anima as …“the archetype of soul coming into its own by way of creative imagination” (202)… Later in his life the death of a maiden will become the inspiration for his Sonnets to Orpheus.

The sonnets are meditations on death, transience, the life cycle, maidens, flowers, trees, animals, the gods—especially Orpheus and his lyre—the quintessential image of the creative imagination. That maiden who died so young takes up residence in the poet’s ear, and in ours:


And it was almost a girl who emerged from
the consonant pleasure of song and lyre
and shone clear through her shady spring attire
and made her bed within my ear’s deep drum.

And slept in me. And her sleep was everything.
The trees I always marveled at, those
palpable distances, the deeply felt meadows… 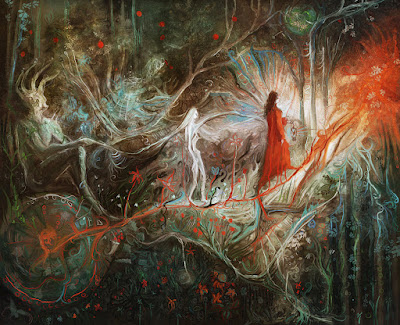 In her death, in her sleep in the poet’s ear, a wondrous world is created—55 sonnets in two parts. Orpheus is a “conjurer” whose “widespread/nature…knows the roots of the willow/can better bend the branches overhead.” (#6 Part I) Above and below are brought together to create the poet’s lyre, made of the roots and upper branches of the willow— a tree associated with grief. Orpheus’ magic, turns grief and decay into vineyard and grape. We are in the realm of the Eleusinian Mysteries here, where the maiden who has been stolen by the god of the underworld, returns to life as leaf and flower in the spring.


We go round with flowers, vine–leaves, fruit.
They speak a language that’s not only of the year.
Rising through darkness, some bright thing breaks clear
revealing, perhaps, the jealousy at the root

still held by the dead, who fortify the earth.
(Sonnet #14 Part I)

Polikoff’s Introduction to his translation is a fine distillation of his writing on the origin of the Duino Elegies and the Sonnets in his Soul History. He places Rilke, a hundred years ago, in a world much like the one we inhabit today, in which “unrelenting violence rent the poet’s inner and outer world.” (p. 1) As WWI broke out Rilke struggled with the “terrible angel” of the Elegies, expressing a “heart–rending lament of alienation from spiritual being.” (p. 7) After the war, having found a home in Switzerland, Rilke was astonished by the “unlooked–for gift of the…Sonnets,” many of which came in a “dam–busting flood of poetic energy” that lasted three days (p. 2).

We are not spared the horrors of death. In Sonnet #25 Part I Rilke imagines Vera’s end:

it gleamed of earth. Until—with horrible pounding—
it stepped through the desolate open door. 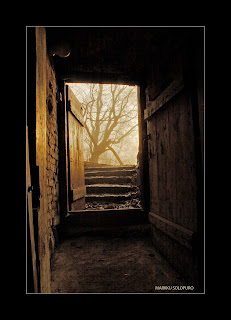 Many of these sonnets are prayers. One of my favorites holds the vast opposites of life and death:


Be forever dead in Eurydice—in praise of things
ascend, singing…
be a ringing glass that shatters even as it rings.

This is a prayer that expresses the chasm we face, mourning those we love who have passed through that veil, as we grapple with the mystery of being and non–being, of singing and shattering, of loss and release. I am always impressed by how grief changes consciousness, breaks through the rigidities of rationality and lets the living symbol in. Rilke illuminates this transmutation:


Torn open by us again and again
the god is the place that heals, unseen.
We’re sharp; we want to know all we can,
but he’s spread out and serene.
—(Sonnet #16 Part II)

The Joy of German


Any true poem lives and breathes in the nuanced confluence of sound and sense it incorporates; to try to transplant its beating heart into the strange body of a foreign language is inevitably a risky experiment. And how much more delicate the operation when the original is…a sonnet to Orpheus; a poem addressed to that God who symbolizes the very unity of music and meaning any translation cannot but betray?
—(Polikoff, Introduction) 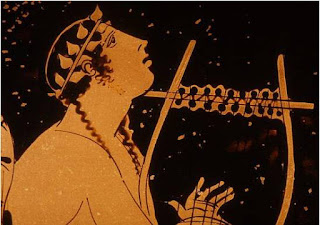 I heard German before I heard English. My parents were German born Jews. I have little call to speak German these days, but I sometimes dream in German, and wake up with a deep longing for my lost mother–tongue. It makes me sad that in our culture the beauty and power of German is not appreciated. Its deep guttural sounds are often mocked. For me German resonates with chthonic energy. It emerges from an earthy place, a root place. English words that are rooted in the Germanic are much more potent than Latinate words to my ear and heart. In Germany recently, I found the language returning to me like water to a thirsty flower. Rilke’s Sonnet #7, Part II describes this feeling: Here is some of the German.

The conceit of the poem is that cut flowers are beginning to die before they are brought back to life with water. And so it is with us, when we are severed from our roots, it takes the water of poetry to revive us.

Although my German is child like and unsophisticated, I get much joy from moving back and forth between the original and Polikoff’s superb translations. As a poet who sometimes works in forms, I know how difficult it is to write a good rhyming sonnet. I am amazed at how elegantly Polikoff manages to translate the complex rhymes and rhythms of Rilke’s sonnets into fine English poetry.

If you are feeling the dark of this time of the year, or grieving a loved one, or, in horror and dread as you watch the swirls of hate and intolerance take over much of the collective, I urge you to listen to Orpheus’ song as received by Rilke and translated by Polikoff. It will give you entry to that temple deep in the woods, where the spirit of the depths dwells. Here is the entirety of the wonderful Sonnet #19 Part I, which I read at my father’s funeral a lifetime ago.

Though the world too will transform
quick as cloud–shape or course
all that’s complete is born
home to archaic source.

Over all coming and going
further and freer
your song–breath’s still blowing
god with the lyre.

Suffering we do not comprehend
and love’s as yet unlearned;
what takes us at life’s end

is shrouded in veils.
Only the song over the land
hallows and hails. 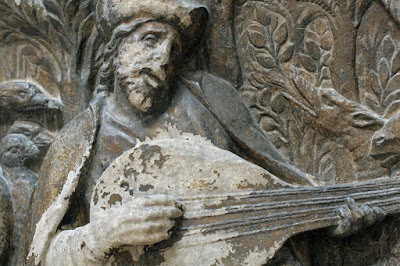 The Sister from Below invites you to hear Naomi Ruth Lowinsky read:

In the dark of the year we welcome the magic of poetry, magic that can take us travelling through landscapes of our past, of our psyches, of the natural world. Three poets guide us, Connie Post, Naomi Ruth Lowinsky, and Lucy Lang Day in “The Poetry of Place.” All three are prizewinners, one with a Lyrebird Award and two with the 2014 Blue Light Poetry Prize.

Place is a powerful Muse who can remember our childhood meadows and woods and all the homes we’ve loved and lost. The Muse of Place inspires poems of yearning, exile, diaspora, and poems about landscape and environmental desecration as well—all the harm we humans have done to our Earth. This Muse loves journeys, the sounds, tastes, smells, and sights of foreign lands and even shows up in dreams, revealing to us mysterious realms. Come to the old church at the end of a dirt road, ancestral homes and a house on stilts, the horned lark singing beside a field of silver hairgrass. 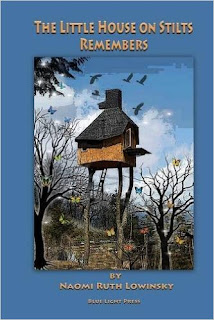