I saw “The Pianist of Willesden Lane” recently at the Berkeley Repertory Theatre. This one woman performance piece is a variation on the Jewish refugee story I have told so often about my own family in poetry and prose (The Motherline, The Sister from Below, Adagio & Lamentation). Mona Golabek tells her mother’s story of escape from the Nazis as a child via the Kindertransport—a British program organized by Quakers and Jews to save Jewish children and bring them to England. Golabek is a pianist from a potent Motherline of pianists. She tells her mother’s story in music as well as in words.


Her mother, Lisa Jura, was a brilliant pianist—a prodigy. When we meet her she is a child of fourteen, played eloquently by her daughter. We’re in Vienna, 1938. She is dressing up to go to her piano lesson. She is excited. She loves her piano teacher and has been practicing a difficult piece in preparation for her concert debut—Greig’s Piano Sonata in A Minor, op. 16. Her teacher turns her away. The Nazis have annexed Austria and it is forbidden to do business with Jews. Her mother, Mona’s grandmother, offers to teach her herself. That is until it becomes clear that the Jews are in terrible danger. It is difficult to get a child on the Kindertransport but Lisa’s parents manage to find a place for her—the oldest of their three daughters—hoping that her musical talent will protect her. In miraculous ways, it does.


Mona Golabek is a marvelous pianist, accomplished in the lush late Romantics—Debussy, Chopin, Rachmaninoff, Grieg. The family story she tells is in many ways my own. It is the story of how music can hold people in unbearable times, how music was a religion for high culture German and Austrian Jews—a way to access divine ecstasy without uncomfortable questions about religion or ethnicity. That is until that terrible moment dramatized by Golabek—Lisa’s rejection by her piano teacher. For my mother, it happened when she was 12, in the German woods with other school children, lighting a Christmas tree and singing carols. Hitler was invoked, and everyone looked at her. Suddenly she knew she was an outcast— a Jew. Being Jewish had never before been an issue.

In Golabek’s story and mine, classical music is a vessel that carries refugee Jews back to the familiar, the beloved—their lost worlds. Music lessons were essential, initiatory—a way of transferring cultural memory and values to the next generation. Ambition, creativity and drive found their outlet practicing difficult passages over and over until the passion flowed out of one’s fingers and one crossed one’s left hand over the right and back again in a crescendo of emotion, tossing one’s head and striking the final chords with bravura. This was Lisa Jura, Golobek and also my father, who was well on his way to becoming a concert pianist as a young man, until he injured his hand. He played the piano all through my childhood, played like Mona Golabek plays, though he was more likely to play Bach’s Well Tempered Klavier than Grieg or Rachmaninoff.

In other ways my story is different from that of Golabek or her mother. I never looked forward to a piano lesson, as Lisa did. I never got dressed up to see my teacher. In an author’s note Golabek writes:


My mother…was my best friend. She taught my sister, Renee, and me to play the piano. We loved our piano lessons with her. hey were more than piano lessons—they were lessons in life…Sitting at the piano as a child, I would close my eyes and listen to her lilting voice and imagine her world.

Luckily for me Frau O had a lovely daughter who was my dear friend. Sometimes I got to spend the night, and we cuddled together under her big red comforter. This daughter became a renowned concert pianist. I always wondered how lessons went for her. Was she as scared of her mother as I was? How did she manage to practice and practice until she became a master of her art? Many years later, when our paths crossed as adults, I asked her. She loved music, she said. But she had to carve out her own niche which separated her from her mother. She became a proponent and performer of new music.

Watching Golabek’s performance it was clear to me that her love of her mother and her love of music were the same thing. Now, I love music. I feel lucky to have been raised in a family that taught me that love. I loved hearing my father play in the next room while I drifted off to sleep. But it is a revelation to me that a girl could feel loved and held by her mother who was also her piano teacher. The child in me has had a belief that Hitler came to live in the breasts of refugee Jews, that loss and agony got locked away in internal concentration camps, only to rise up screaming in the privacy of family life. 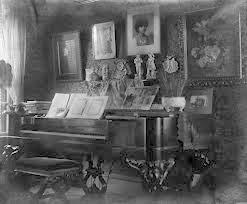 Golabek’s piano playing evoked the warm glow, the gold and red velvet elegance of her mother’s lost Vienna. Frau O also came from Vienna. It occurs to me now that it was not so much Hitler in her, but her longing to keep the tradition alive, that made her so angry with this stupid American born girl who refused her beloved vehicle of transport. As for me, did I refuse to practice, refuse to take music lessons seriously because I got yelled at? Or is it that my creative libido took another form?

Years ago I remember a colleague telling me about her ecstatic experiences singing classical music in a chorus. “You really have to do this” she said. I was surprised at the hot flare of anger that rose in me, and heard the sharp edge in my voice when I responded: “I don’t want to sing other people’s music.” That flare of anger became the beginning of a poem, which became the beginning of my first book of poems, “red clay is talking."

Anger, I’ve discovered, is a great opening to creativity. It is how the piano teacher became my muse.


An Invitation from the Earth Muse

Indwelling: Our Human Participation in the Dream if the Earth


A workshop emphasizing the role of transformation in consciousness as an essential factor in addressing the environmental crisis. (With Barbara Holifield, MFT & Carol MCrae, PhD)

What Jung intuited nearly a century ago has never been more relevant: Western culture would become lost if we were not able to sustain a connection to nature and learn from the wisdom of the indigenous people, whose stories are deeply woven with the land. We have developed a split between ourselves and the earth.

Just what do we do as concerned citizens? What are our individual stories and what might be a more conscious collective guiding myth?

We will allow what emerges to build on Thomas Berry’s idea that hope for our future lies in our human participation in the dream of the earth. Check out Patricia Damery's blog for more on environmental issues.