In the beginning all creatures were green and vital.
They flourished amidst flowers.
—Hildegard of Bingen 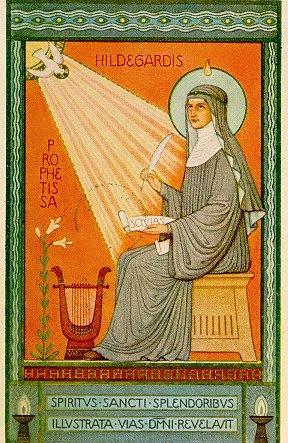 The world has gone green and blooming. “The Green Man” has returned. He lives in the time beyond time, dies and is reborn in the cycle that returns green to us after a long hard winter. I was getting worried, what with the drought turning California yellow and brown and the Polar Vortex in the Mid-west and East leaving snow on the ground into April.

I used to wonder why old people take up gardening. Now I understand. As one’s body goes dry and brittle one lusts for “The Green Man”—the young sap rising, the bud and blossom that promise that life will go on even if we ourselves must face our mortality.

At our house, it’s Dan who tends the roses. I am giddy with the bounty he keeps bringing in from the garden—gorgeous red, yellow, pink, and white blooms bring joy to tables and bureaus, celebrate gods and goddesses, express the wisdom of Hildegard, who married two words—“green” and “truth” to coin the word “veriditas,” describing the moment God heals you with a plant.


My 93 year old mother in Indiana, who is confused about who she is and where, understands the miracle of “veriditas.” She tracks the weather, tracks the state of the trees, tells me in our weekly phone calls about the snow, the wind, the cold that kept her trapped indoors for weeks. She describes the winter trees, how bare they are—no leaves, no blossoms. And yet she muses, they are beautiful, doing their naked dance in the wind. Last Sunday she told me she could see green leaves emerging. There was joy in her voice. 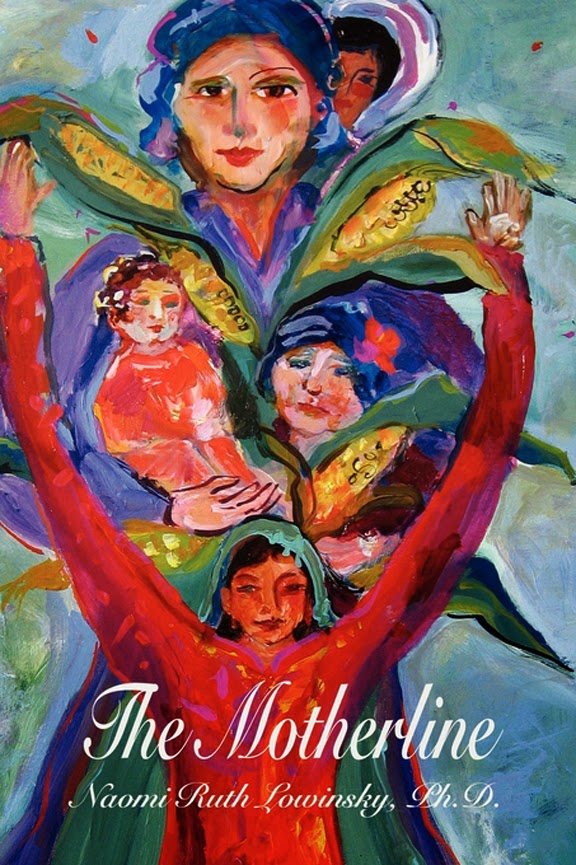 Twenty-five years ago when I was working on my first book, The Motherline, I stumbled across the work of Robert Lifton, a psychiatrist who argued for a new psychological paradigm of “biohistorical continuity.” His ideas were informed by his study of survivors of the atomic blast in Hiroshima. I quoted from his book, The Broken Connection:

Immediately after the bomb fell the most terrifying rumor among the many that swept the city was that trees, grass, and flowers would never again grow in Hiroshima. The image contained in that rumor was of nature drying up altogether, life being extinguished at its source, an ultimate form of desolation that not only encompassed human death but went beyond it. The persistent and continuing growth of wild “railroad grass”…was perceived as a source of strength. And the subsequent appearance of early spring buds, especially those of the March cherry blossoms, symbolized the detoxification of the city and (in the words of the then mayor) “a new feeling of relief and hope.”

I wrote: “It is fitting that those who survived the atomic bomb would be the ones to remind us of the simple and profound truth that we are children of the earth, participants in seasonal cycles, dependent upon the continuity of plant and animal life for our own lives.“ We are approaching Earth Day three generations since the bombing of Hiroshima. Our fears have shifted from nuclear war to catastrophic climate change. As a culture we’ve come no closer to honoring the essential truth which Lifton named. Psychologists have been busy inventing new terms to express the wounds we suffer as a result of our dislocation from the natural world. Here are a couple:


Solastalgia is a term coined by Glenn Albrecht, an Austrialian environmental philosopher. A mash-up of “solace, “desolation, and “nostalgia,” it describes the inability to derive comfort from one’s home due to negative environmental change.

Nature Deficit Disorder refers to a hypothesis by Richard Louv that human beings, especially children, are spending less time out of doors, resulting in a wide range of behavioral problems.

If you recognize these disorders in yourself or those you love, please save the date, Nov. 5th 2014. My fellow writers Leah Shelleda, Patricia Damery, Frances Hatfield and I will be doing a writing workshop, Wounded Earth, Wounded Psyche, at the Jung Institute in San Francisco. We will address the need to find language to express our experiences of climate change, our grief, fear and hope for our mother earth.

There is a danger that we can become so paralyzed by our “Solastalgia,” so trapped in our “Nature Deficit Disorder” that we don’t take in the beauty of the trees leafing, the roses blooming, don’t experience the earth as fragrant and alive, don’t hear birds singing or bees buzzing, don’t feel the joy the survivors of Hiroshima felt at the sight of wild grass and cherry blossoms, or the joy I heard in my mother’s voice describing the greening trees. We need the truth of green and the green of truth that Hildegard called “veriditas.” We need that vegetative god the pagans call “The Green Man” or “Jack’o Green.” We need “The Green One” of Islamic Sufism, who is a ‘mediating principle between the imaginary and physical world and a voice of inspiration to artists.’ We need to be healed by plants.

“The Green One” needs our worship, our love, our joy, He leaps into poems, demanding my attention, taking me out of historical time and into the “time before time” or picking me up on his camel, and bringing back my toddler self to feel the joy of spring. Here he is in a section of my poem, “A Creation Story,” about Mesululu who created the world, made mountains, made valleys, made oceans, made children, made bear eagle coyote whale, but was still lonely:

What was it she needed?
What would made her glad?

Into flickering fire and the children
Sit round it and laugh, remembering
How their parents would argue about
Who came first, who made whom

The Sufi Green One leapt into my poem when I was reading Rumi. He is associated with Khidr, which means “The Green One,” an inner figure in Islamic mysticism, a kind of spirit guide. The poem took me places I did not expect to go, which is, I guess, the nature of “The Green One.” I was further surprised and pleased that “The Green One” found its way into a literary magazine, Minetta Review. May “The Green One” take up residence with you.

Find your Muse in Santa Fe

On April 25 & 26, 2014 the New Mexico Society of Jungian Analysts presents a lecture and workshop by Naomi Ruth Lowisnky

Lecture: Self Portrait with Ghost: The Art of Lament and Redemption
Workshop: Speak, Muse: A Day with the Sister from Below

About the Presenter
Naomi Ruth Lowinsky, Ph.D. lives at the confluence of the River Psyche and the Deep River of poetry. Her book, The Sister from Below: When the Muse Gets Her Way tells stories of her pushy muse. She is the co-editor, with Patricia Damery, of the new collection Marked by Fire: Stories of the Jungian Way. She is also the author of four books of poetry, including the Faust Woman Poems. Her poetry and prose has been widely published and she is the winner of the Obama Millennium Award. She is an analyst member of the San Francisco Institute and has for years led a writing circle there, called Deep River.
April 25 - Lecture: Self Portrait with Ghost: The Art of Lament and Redemption

"Let us build the bond of community so that the living and the dead image will become one and the past will live on in the present…." C.G. Jung

"Often I have such a great longing for myself. I know that the path ahead still stretches far; but in my best dreams I see the day when I shall stand and greet myself." Rainer Maria Rilke

When you lose three children, your home and your country, how do you go on? If you are Emma Hoffman, a gifted painter in the impressionist tradition, you paint. Those paintings continue to speak of the redemptive power of art to Hoffman's granddaughter, Naomi Ruth Lowinsky. Years ago, when she was in analytic training at the San Francisco Institute, Lowinsky had a dream in which she was told: "On your way to Jung's house you must first stop at your grandmother's house and gather some of her paintings."

Lowinsky was the first child born in the New World to a family of German Jewish refugees from the Shoah. She had a special tie with her only surviving grandparent, whom she knew as Oma. Oma taught her that making art can be a way to transmute grief, a way to bear the unbearable. A series of self-portraits, portraits of family, landscapes, interior scenes of the houses in which she lived, reflects her lamentations, her wandering, her search for redemption. Lowinsky understood her dream to mean that she had to follow the path of her own creativity. She did not know then that the dream would turn out to be literally true as well. She would need to put her art - her poetry - at the service of her grandmother's paintings. Her grandmother's spirit would demand it. Her opus would need to intersect with her Oma's, and together they'd make their way to Jung's house.

This presentation is the result of an ongoing dialogue between Hoffman and Lowinsky's art. She will weave together Emma Hoffman's story and paintings, her own poetry and prose, and her reflections on Jung's Red Book as an example of the "art of lament and redemption," a form she calls "Jungian Memoir."

"The spirit of the depths forced me to speak to my soul, to call upon her as a living and self existing being." C.G. Jung

In this writing workshop Naomi Ruth Lowinsky will introduce her muse, the shape shifting Sister from Below, and invite her to inspire your writing practice. With the Sister's help she will facilitate an imaginative encounter with the stuff of your inner and outer life - your own Jungian Memoir.

The "Sister from Below" is a fierce inner figure. She emerges out of reverie, dream, a fleeting memory, a difficult emotion - she is the moment of inspiration - the muse. This Sister is not about the ordinary business of life: work, shopping, making dinner. She speaks from other realms. If you'll allow, She'll whisper in your ear, lead your thoughts astray, fill you with strange yearnings, get you hot and bothered, send you off on some wild goose chase of a daydream, eat up hours of your time. She's a siren, a seductress, a shape-shifter . . . Why listen to such a troublemaker? Because She is essential to the creative process: She holds thekeys to the doors of our imaginations and deeper life - the evolution of Soul.

Lecture and Workshop are open to those who write and those who want to - bring pen, notebook, and a brown bag lunch.