The Muse of the Wild in Eastern Oregon (Part Two)


Summary of Part One

Possessed by the Muse of the Wild, Dan takes us on a car trip to Eastern Oregon, considered by many the “middle of nowhere.” We are encouraged to explore an improbable mountain, The Steens. When I hear there are wild horses in those parts my muse gets engaged. Though the wild horses never show up we find ourselves gripped by the magic and beauty of an ancient landscape.

In Part Two we go to the original source of our interest, the Malheur Wildlife Refuge.

Malheur Wildlife Refuge is named Malheur—misfortune in French—because of the misadventure of a French Canadian fur trapper, Peter Ogden, looking for beaver and otter and finding a lake with undrinkable (alkaline) water. Had he gone around to the south side of the lake he named Malheur, he’d have found the fresh spring water the Paiutes drank, where the headquarters of the Refuge is now located.


We are told by the locals that on our way to Malheur, it is essential we stop at Pete French’s Round Barn and talk to Dick. “He’s our historian,” our hostess Corinne tells us, “Comes from three generations of ranchers.” Dick—Richard Jenkins—is a fine old man who owns the ranch on which Round Barn and visitor center sit. He presides over a treasure trove of Western style clothing, leather and gifts, as well as a large selection of books about Oregon’s high desert, its history and its wild life. Since we are traveling by car we are at risk for buying books. I ask him for Mark Highberger’s guidebook. “Out of print” he says. Turns out he knows Highberger well, and agrees with me about what a fine writer he is. Dick had asked him to write about the life and death of Pete French, whose turbulent life shaped the story of these parts. That book he has in stock. That book (Untamed Land: The Death of Pete French and the End of the Old West) we buy.

Dick also knows E.R. Jackman, the man Highberger keeps quoting, whose words I keep writing down. He was a professor at Oregon University, whose big coffee table book (Steens Mountain in Oregon’s High Desert Country) Dick highly recommends. We buy that one too. It’s full of history and beauty.


When we tell him we are on our way to Malheur Refuge we get an earful. Dick is critical of the current administration of the Refuge. Back in the day, fifty years ago, according to Dick, the ranchers and Refuge management worked together. They got rid of noxious weeds and did other maintenance tasks in exchange for grazing their cattle there. Now the Refuge prides itself on keeping cows out. Dick is angry with the “so–called environmentalists” who want to “leave Nature alone, to do Her thing. But they don’t know Nature. Now, we ranchers, we really have to be environmentalists because our livelihood depends on it.”

Dick tells us that noxious weeds now overrun many parts of the sanctuary, and that the Sandhill Cranes, which were hatching many young 50 years ago, hatched none last year. He shows us a book about an alternative approach to environmental issues, by Dan Dagget, (Gardeners of Eden: Rediscovering Our Importance to Nature.) We buy that book, too.

Dagget argues that humans once filled an important niche in the ecosystem, serving as predators, foragers and cultivators. We were hunters, gatherers, small farmers and gardeners, who “benefitted the ecosystems of which we were a part in much the same way beavers, bees and wolves do.” But now we live on Earth as aliens, and get our food from “a system of extractive technologies more characteristic of aliens than of a mutually interdependent community of natives.” He urges us to become Native again. His work includes developing an approach to conflict resolution involving environmentalists and ranchers.

His book comes at an interesting time for me. I will be giving a presentation, "Earth Angel and the Tohu Bohu" (on ecopsychology and environmental issues) in Cleveland on September 19th. Working on this has roused an ongoing inner argument between my Muse of Wildness, who rhapsodizes the ideal of wilderness, and my creative Muse who steps in and says, “Hey, humans are by nature tool making creatures. Even the Paiute Indians who wandered The Steens and Malheur, used bows and arrows. Close to 10,000 years ago their ancestors used spears to hunt big game animals. There is growing evidence that ancient peoples cultivated the land.” It reminds me of the argument between Wendell Berry, the farmer poet, and Gary Snyder, the mountain man poet about these very issues, which Leah Shelleda recently blogged about.

When I ask Dick about the wild horses of Kiger Gorge, hoping for the inside dope on how to see them, I see his passion turn to rage. “Those horses lost me my land and my cattle. I was in court with the government for years getting it back. Those horses aren’t wild, they’re feral—formerly domestic animals my grandfather released one winter because he couldn’t feed them.” Dick is on a roll. He had looked the wild horses up in a horse encyclopedia. (I remember that horse encyclopedia from my wild horse days.) “It says they are Kiger Mountain Mustangs. Those are no mustangs,” Dick said, “They’re Morgans with a bit of Welsh Pony thrown in. And you show me where the Kiger Mountains are!”

The Muse of Malheur


Entering Malheur Wildlife refuge, I thought about what good fortune the refuge has been for the herons, grebes, swans and egrets whose feathers were worth their weight in gold back at the turn of the 20th century. Ladies coveted them for their hats, and bird populations plummeted. Theodore Roosevelt, an ardent environmentalist, created the Lake Malheur Refuge to protect those birds. As we drive the gravelly, narrow roads of the refuge near Benson Pond, at the wrong time (midday) and the wrong season (late summer), we are afraid we might suffer the Malheur of seeing no wildlife.


But as our minds and hearts slow down, as we get out of the car and walk in the heat and humidity, we are enchanted by cat tails and deep green marsh grasses, by a green island in the middle of the pond, by graceful egrets and a blue heron—or is it a Sandhill Crane—standing in silent meditation in the water. The middle of nowhere turns into the center of the great wheel Mark Highberger quotes E.R. Jackman describing so eloquently, where one is “the hub of a vast, visible universe, and…the link between God and all these thousands of square miles below.” 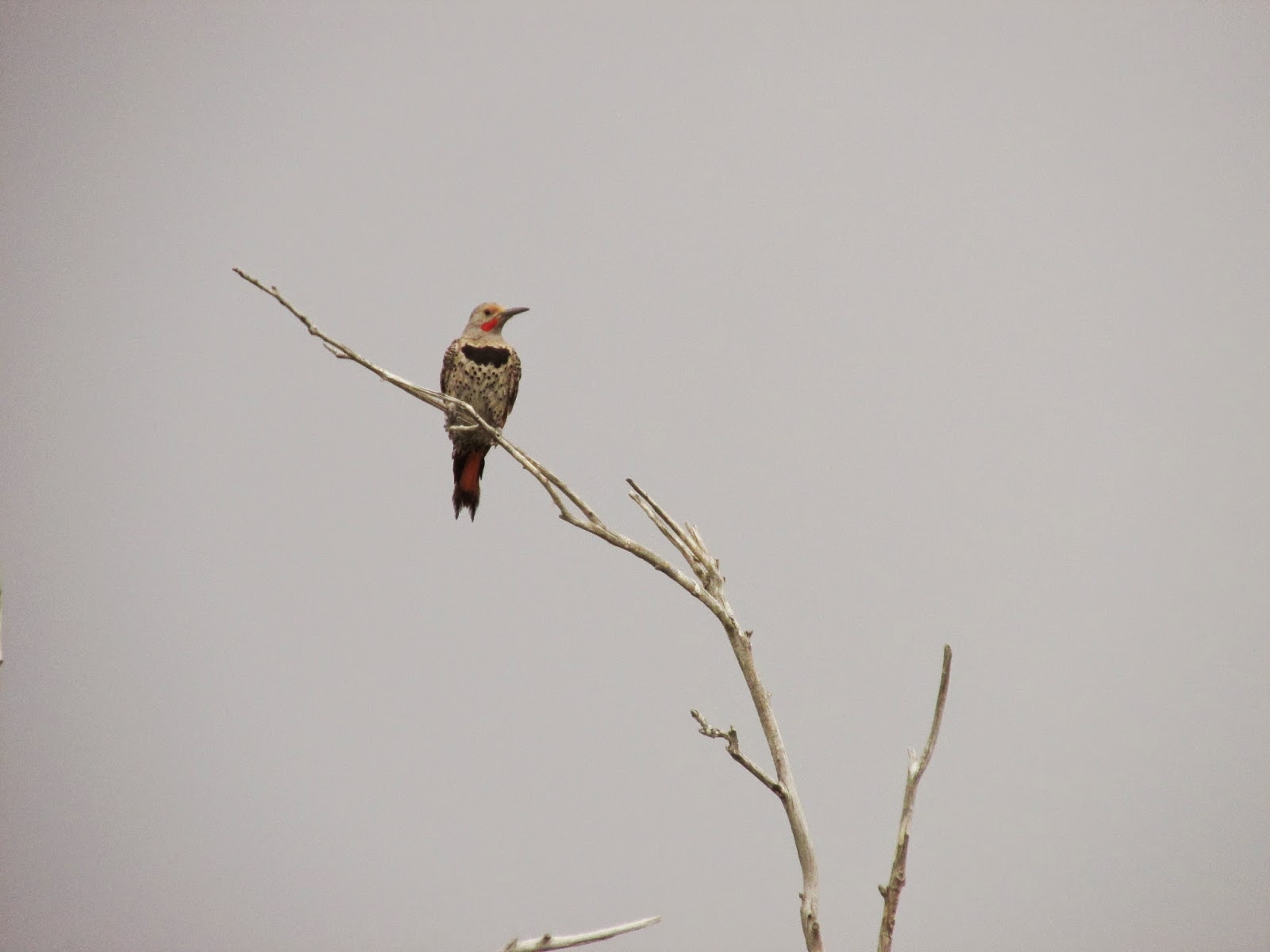 Once that link is made, all sorts amazements happen. A Swainson’s Hawk, perched on the top of a tree, takes off, showing its elegant tail feathers. A hawk of some other kind, with reddish wings, flies ahead of us as if to show us the way. Magpies swoop and dive. A woodpecker poses for a picture. Mule deer lift their eloquent ears and watch us. A storm cloud gathers above and breaks, showering us with heavy rains, scaring us with thunder and lightening. No wonder the nearby river is called Donner und Blitzen, thunder and lightening in German.


A Corral for Wild Horses 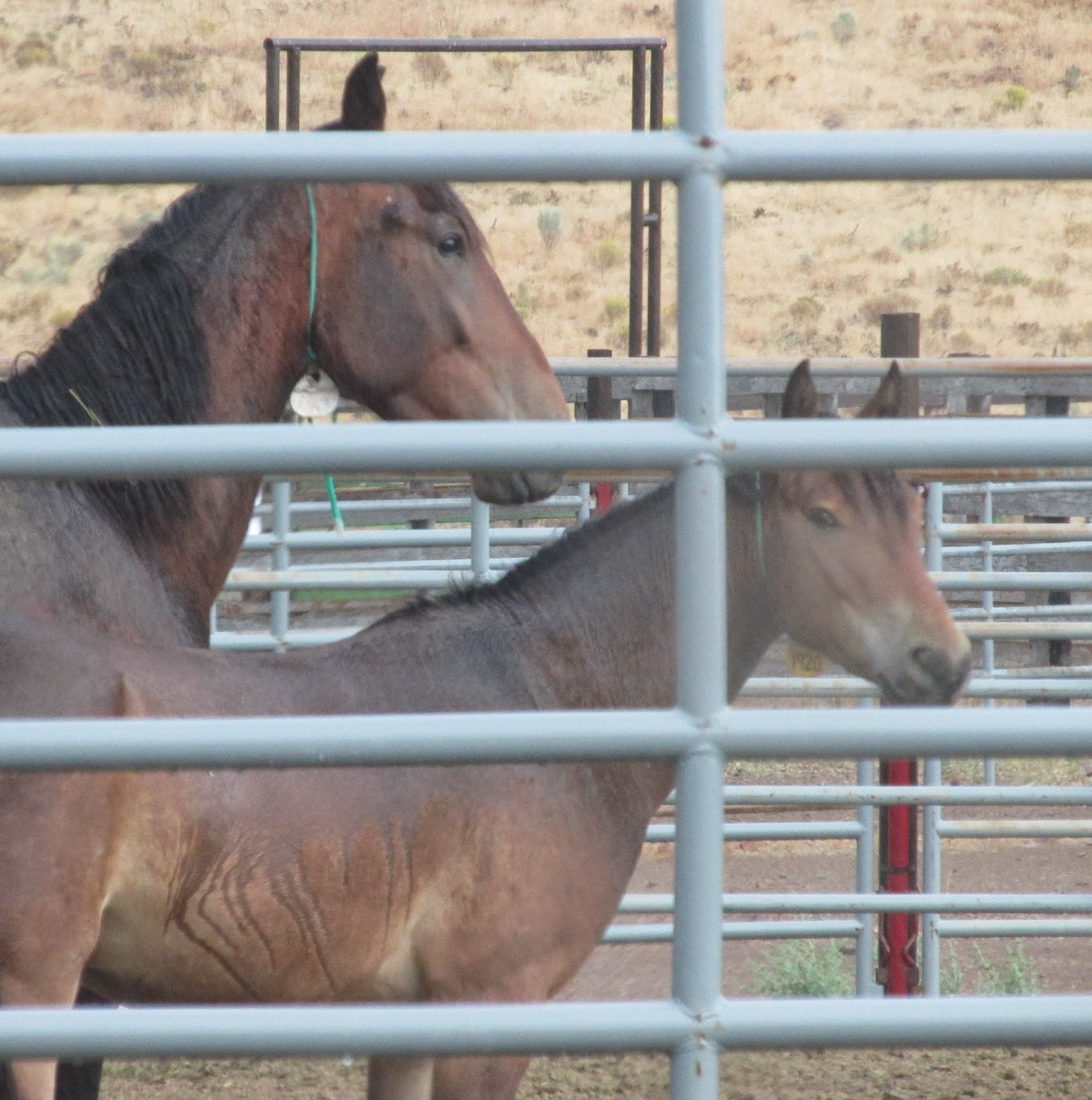 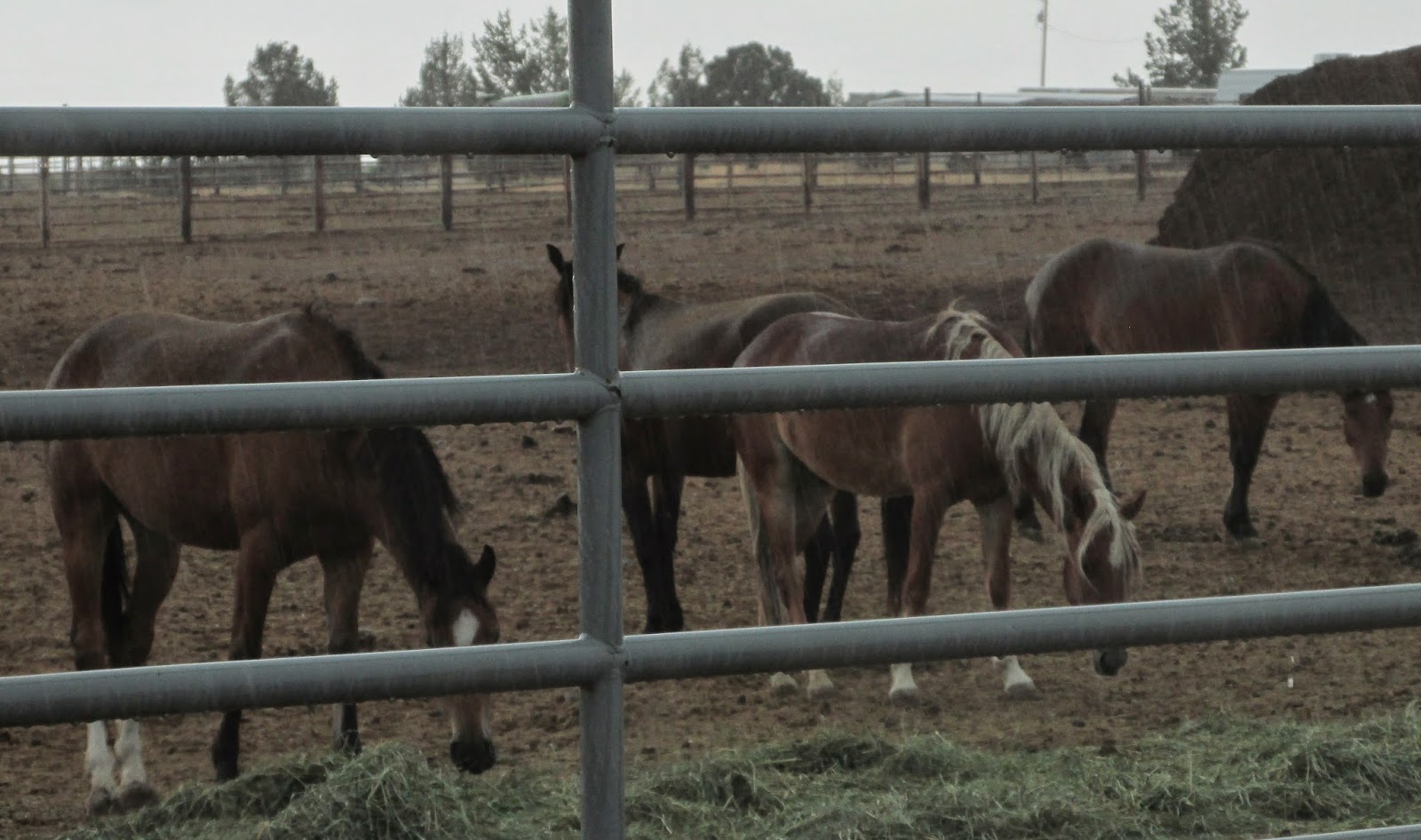 We do get to see the horses, the next day. Mike and Corinne, our hosts at the Sage Country Inn, explain that the Bureau of Land Management also manages the horse herds, culls them and bring the overflow to a large corral outside of Burns. These horses are available for adoption. The wild horse girl in me is horrified at the idea of corralling wildness. Yet I long to see the horses. A beautiful rain has cleansed the air of heat and stickiness. It is still drizzling as we drive past the “wild” horses. Even from the car, even behind metal bars, they are sobbingly beautiful.

There are mares and foals, golden palominos, pintos, chestnuts with dark manes and light manes. They arch their necks and prance, wheeling away from Dan’s camera, reminding us of the elegant lines of horses in cave paintings.


Eastern Oregon surprised us—difficult, conflicted and sad as it often is. We were touched by how open and real the people are, and deeply moved by the ancient beauty of marshland, high desert, gorges and The Steens. We learned that it is far from the middle of nowhere. It is the middle of somewhere profound and magical.