An Afternoon of Poetry, Music and Art 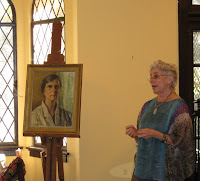 On a Sunny afternoon in September, 2010, in the Angel Room of an old Oakland, California church, several dozen people attended An Afternoon of Poetry, Music and Art to celebrate publication of Naomi Ruth Lowinsky's most recent book of poems, Adagio and Lamentation. The afternoon was lovingly captured in author Marvin Hiemstra's column, Poetry in Spite of Itself, and is excerpted below. Entitled, "Don’t Let the Light Go Out!," Hiemstra wrote,

"Poetry events tend to form impenetrable unpoetic thickets in the landscape: extra thorns, strange noises, and heavy breathing. In the Bay Area a dozen or more invitations pop up each day. How to choose? There are a handful of poets whose activities I will always attend if I’m in town. When an e shout for Naomi Ruth Lowinsky appeared as “An Afternoon of Poetry, Music and Art” to celebrate the publication of Adagio and Lamentation

by Fisher King Press, I charged to my calendar and found Sunday afternoon, September 12, open.

"Musical Improvisations began the Afternoon of Poetry, Music and Art: Lisa Safran, fearless leader of the Bitter Mystics band, at the piano and Chris Evans playing the greatest rarity in captivity, a subtle and articulate cello.

"An impassioned suite of three songs brought the audience into the artists’ immediate families and beyond to the family of mankind. Misha Safran, vibrant soprano and Bitter Mystics member, sang a vibrant tale of her teenage son who loves to one up her. When Misha tells him, she loves him. The son fires back, 'I love you more!' Lisa Safran shared her happy song, 'Did I meet you in a dream? Was it yesterday or today? All I know everything went okay.' Chris Evans joined the two for a high speed love lament, 'Pick me up! Drop me down!' Cello cascades between the verses were both inevitable and breathtaking.

"The 1925 ... 1st Congregational Church of Oakland was adorned with paintings by Emma Hoffmann, Naomi Ruth Lowinsky’s grandmother. Born in 1881 Emma Hoffman transcended an impossible life in Germany where she lost 3 children and insisted on leaving the country with her husband at the most auspicious time: just before one of History’s most unspeakable period of Evil Incarnate.

"Focused in the realm of light like the French painter, Edouard Vuillard, Emma in America continued painting and created the radiant interior scape of the Berkeley home where Naomi, a teenager, often visited her “Oma.” It is a study in the mystery of light that illuminates the cover of Adagio & Lamentation. Naomi lovingly shared with the audience her understanding of the precious legacy of light in three portraits created by her grandmother: a self-portrait of a mature woman alive with raw sorrow and tenderness at the same time, a portrait of Naomi’s mother as a young girl also a study in the pain of sorrow drawn with tenderness, and a luminous portrait of Naomi at age 2. The resolute little exhibit featured a fine sketch of Albert Einstein who, proclaims a family anecdote, assured Emma Hoffman that she was a professional artist, but he was only an amateur physicist. The world owes much to Einstein’s humilitas.

"Naomi Ruth Lowinsky’s presentation of poetic journeys from Adagio & Lamentation anchored the intrepid afternoon. First poem in the heart felt collection is titled “Oma” and sketches with the greatest clarity Naomi’s relationship with her grandmother...."

Hiemstra reminds us that "It is always the poet’s challenge and prerogative to create the luminous moment among so many shades of sorrow.” He continues,

"...the three glowing musicians reappeared with a selection of Naomi’s poems set and/or alive on a musical line. 'What broke?' is an almost microscopic observation of a child’s world and the terrifying importance of every detail: at that moment and for the rest of that child’s life. The poem begins with the child/poet hiding under the dining room table wondering 'has it already happened or is it about to?' Premonition is often the most grotesque and perplexing bugaboo....

"Imagine, if you can, the power of 'what broke?' set to a double flow of poignant, questioning lyric voices.

“'Missing child' from Naomi’s book red clay is talking, Scarlet Tanager Books: 2000, was sung as a lament, a prayer, a search, and much more. It begins with a quote from Pablo Neruda:

And it was at that age…Poetry arrived
in search of me. I don’t know, I don’t know
where it came from, from winter or a river.


"Many landscapes in the poet’s childhood are visited: all looking for the moment poetry arrived in the child’s life. From the midst of the exploration:

"The poet/child must and can wander everywhere or anywhere. That is the precious legacy of the poet. There is no place that imagination cannot take the poet/child:

"For a final gesture the villanelle title poem, Adagio and Lamentation, was first read by Naomi and then sung by Lisa and Misha with an ethereal cello counterpoint by Chris. Lisa composed the reverie based on sublime modulations loosely based on Bach progressions. Here are the first, third, and sixth stanzas following the poet as she works her way through the present and the past:

"So much Enlightenment and Comfort in one unforgettable afternoon! Thanks to Dan Safran, the poet’s stalwart husband. Thanks to Mel Mathews and Patty Cabanas from Fisher King Press who presented a table of poetic treasures for the event. Thanks to the Angel Room site with its noble genius loci, faded, but filled with love. When that remarkable building is someday gone, where will the joyful spirit of music go to dream of moments well-played?

"To thrive in the midst of a resplendent family is a rare privilege. To share that privilege with the world is a great gift of compassion, understanding, and delight. Adagio & Lamentation is Naomi Ruth Lowinsky’s generous gift to all of us."

Marvin R. Hiemstra’s book, A Poet Wrangler at Work, will appear in 2011. His column, Poetry in Spite of Itself, appears regularly in the Bay Area Poets Seasonal Review. Comments about this column are welcome. drollmarv@aol.com
Posted by Dan at 2:31 PM