The Muse of St. Francis and the Turtles 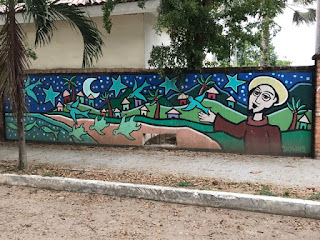 This sister now cries out to us because of the harm we have inflicted on her by our irresponsible use and abuse of the goods with which God has endowed her… We have forgotten that we ourselves are dust of the earth (cf. Gen 2:7); our very bodies are made up of her elements, we breathe her air and we receive life and refreshment from her waters.
Pope Francis Encyclical Letter Laudate Si
On Care for Our Common Home 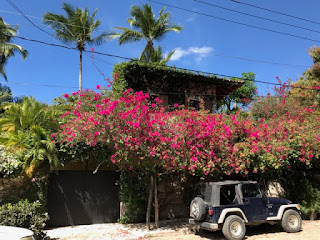 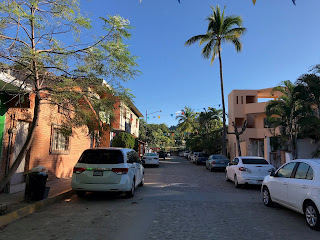 San Pancho, a charming coastal town north of Puerto Vallarta in Mexico, has been a haven for Dan and me for fifteen years. We come for a couple of weeks in the winter, to get warm, to slow down our frenzied American minds, to open our beings to the color, music, and sensuality of a place where the tapestry of life is woven slowly, by different gods so it seems, than our own. This year especially, we were glad to get out of the US during the so–called impeachment trial, when the separation of powers was sacrificed to the growing tyranny, greed and corruption of the executive. Mexico is no example of fairness and democracy but in this little town we have found a rare blend of influences which create unusual harmony.

San Pancho is a nickname for San Francisco—the town’s official name. Its patron saint, of course, is St. Francis. Its small Catholic Church is a bastion of tradition. But the Huichol beadwork jaguars for sale in the square speak to other traditions, as does St. Francis himself; on murals all over town he is in harmony with the birds, the fish, the turtles who lay their eggs on the beach, and are protected by an environmental group— Grupo Ecológico de la Costa Verde —I call them the Turtle People, who harbor [protect the turtle] eggs until they are self sufficient hatchlings, and then in a sacred ritual, release them to the sea.

It is as though St. Francis had a vision of a place without poverty, where earth, sky, sea and their creatures live in harmony. San Pancho works at being such a place. The local people who own the stores and the restaurants go back to the four families—some say as many as ten families—who peopled the original fishing village. Many people from Mexico City and Guadalajara as well as from the US and Canada own houses here and are engaged in the community. They support the Turtle People, San Pancho Animales, which rescues animals and runs a spay and neuter clinic and Entre Amigos, which runs the recycling program, a program to help local families pay their children’s school fees and send them to college, and much more. Dan and I sponsor a youngster. Her animated drawing of land, sea, sun and birds brightens our refrigerator at home. It has been for us a blessed place, one of those magical spots that draws positive energies. But in recent years St. Francis’ vision has been threatened. 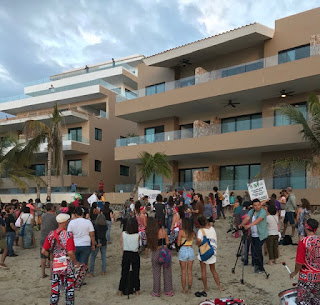 The visible manifestation of that threat is an ugly block of condominiums plopped down on the beach by some developer from another country, against the will of the townspeople and against the law of Mexico, which claims the beach for the people. This monster is in total disharmony with its environment—the palapa covered restaurants, the ocean, the surfers, the frigates high in the sky and a skedaddle of pelicans (sometimes 13 at a time) skimming the waves with their wings, who make Dan and me gasp with pleasure. We are, as is our ritual, on the beach to watch the sunset. But even more, we are here to participate in a demonstration against the monster, Punta Paraìso (Point Paradise), held in synchrony with a release of turtle hatchlings. What a scene this is:

A band of drummers, the Batalá Mundo, associated with the international samba reggae group begun in Brazil, wearing red, white and black clothing, beat their red, white and black drums ferociously, joyously, fiercely, shaking their drumsticks in the air like fists, clearly enjoying the threatening sound they make.

A tall, gaunt St. Francis, towers above it all, looking as though he’s been painted by El Greco, casting his sorrow like a shadow on the people, mystifying the children who approach him warily. 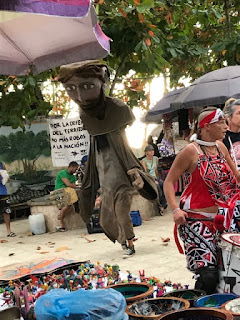 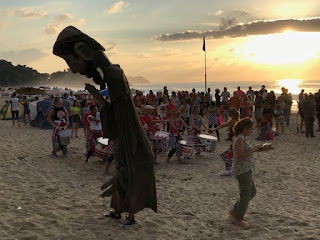 St. Francis is mourning our beautiful beach, the beach that belongs to the dogs who leap and run, to the laughing babies in their daddy’s arms, to the mother who pulls out her breast to nurse her newborn, to the vendors selling sweets, snacks, beaded earrings in vibrant colors, to the turtle hatchlings crawling over each other in two plastic pails, in a rush to get back to the sea, to the children with awed faces reaching into the pails—“can we hold them?”— to the people on their knees in the sand shaping large turtles —offerings to that great animal spirit of peace, patience, endurance and harmony among all forms of life—sacred to San Pancho, sacred to St. Francis. 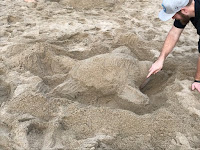 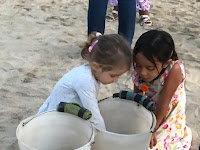 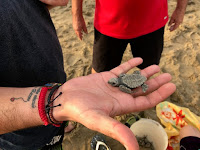 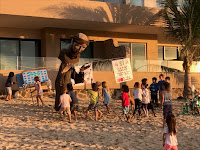 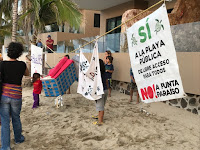 The surf roars, the sun gets lost behind a cloud, is reflected in the sea. St. Francis dances with the children in front of the big monster building and its effigy—a piñata—which the children will soon destroy with fierce sticks.

The newcomers who bought condos stand on their decks, taking photos of the angry crowd. Did they know what they were getting into? St. Francis speaks for peace but knows that fierceness is required to stand up to the forces of greed, corruption and the desecration of our earth, our sea, our sky.

The drums beat. The crowd shouts “Playas Libra! No a Punta Paraìso!” (Free the Beaches. No to Point Paradise!) TV cameras are the eyes of the world as St. Francis hugs Turtle. A drone hovers over the monster looking like a huge mosquito. Our friend Bill, who lives here, who works hard for the people and the animals of San Pancho, tells us that somewhere, in a courtroom, the monster is on trial. Bill is hopeful.

Seems it takes the endurance of Turtle to defeat a monster. The children keep banging on the piñata. The drums keep on drumming. The hatchlings keep crawling over one another. The Turtle People keep admiring them, enchanted by their fragile beauty. St. Francis keeps shaking his mournful head as the sun slips out of the cloud and spreads rays of glory down to the horizon, creating a pyramid that becomes a circle of light at the horizon. Soon the sun will go down, the children will break up the monster piñata; releasing candy for all. When will the hatchlings be released? 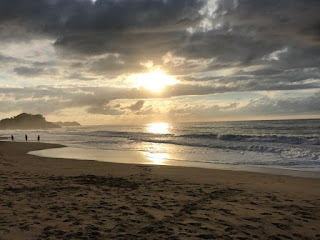 Seems it takes the patience of Turtle to wait for the right time. The keeper of the hatchlings explains: “We need to wait for the end of twilight, when there is almost no light, to let them go, or the fish swimming below them will see their silhouettes and eat them up.” None of us want that to happen. Soon, the keeper of the hatchlings will mark out a space in the wet sand. No one may cross this line—this belongs to the babies. Soon we will watch him, who brings the love of St. Francis to these creatures, release them out of the plastic pails in the near dark. We strain to see them, such tiny beings, heading into the surf. We Turtle People gasp, cry out with joy when a wave comes to carry these babies home. Our babies, our brother turtles, as our sister the sickle moon drifts across the sky, carrying the vision of St Francis—all creatures are kin, pelicans and turtles, dogs and the buyers of condominiums, drummers of Batalia Mundo, mothers and fathers of baby humans, we are all brothers and sisters, all hatchlings of the universe. 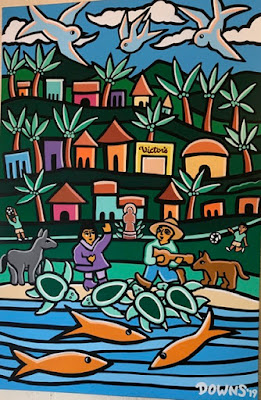 Posted by Patty Cabanas at 5:36 PM