Some Reflections on Loss and Grief on Mother’s Day

On a recent Thursday my friend Cathy and I were having lunch—as we regularly do— telling each other stories from our lives as we have done since we were girls. There was a sudden commotion across the street from the restaurant: a procession of many children and some adults had turned the corner of Alcatraz Avenue and was marching down College Avenue. They wore blood red T shirts, and carried placards that read: “Peace. Non Violence. Adam we love you.” Sad children, weeping children, adults with solemn faces. They chanted: “Adam Adam Adam. We want Peace.”

We who had marched against wars and other atrocities, we who had been washed down the steps of San Francisco’s City Hall while demonstrating against the House Un-American Activities Committee fifty years ago—when we were students at Berkeley High— watched this procession with amazement and wonder.

What was being protested?

Adam, we learned, was Adam Williams, a young man, 22 years old, who worked as an aide and mentor in Peralta Elementary School’s P.E.A.C.E. after school program. He was shot outside Sweet Jimmie’s at Jack London Square on the night after Easter—an innocent passerby during an attempted robbery. I found his photo on line—such a beautiful young man. 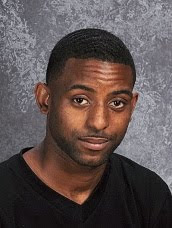 I don’t know Adam Williams. But I know something about how loved he was. The children whose lives he touched, touched me with their tears, their passionate protest against his senseless death, their hand written placards. One read “Be treated as you want to be treated. Mr. Adam, I miss you.” 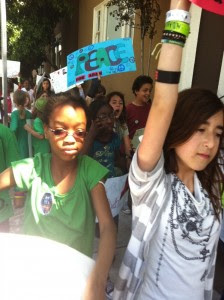 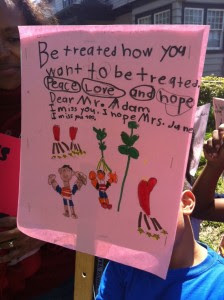 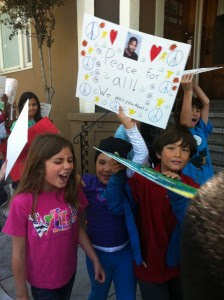 I don’t know Adam’s mother, but I do know something about grief. My grandmother lost her two sons when they were in their early 20s. They had gone skiing. Their young lives were buried in an avalanche. This was many years before I was born. But her grief was my companion growing up. I learned that a mother who loses her child never stops grieving, never stops remembering, needs to keep that child’s memory alive by telling the stories. I wrote about this in my book, The Motherline.

Terrible loss, sudden death, unbearable grief are part of all our Motherlines. Go back far enough in your Motherline and you’ll find children who died too young, mothers who died in childbirth, fathers killed in war or on the streets.

Cathy and I stood at the corner of College and Alcatraz in the throngs of blood red T shirts whose slogan was ”Adam’s March for Peace.” We looked at each other with tears in our eyes.

One can think of this terrible story as an example of the mysteries of fate. Or one can see it as a symptom of a violent and gun crazy culture. Either way it is unbearable.

This Mother’s Day make room in your reflections for mothers who have lost their children. They do not stop being mothers. Remember the mother of Adam Williams. Remember how much he was loved.
Posted by Dan at 12:53 PM