News from the Muse: The Muse of Jungian Memoir 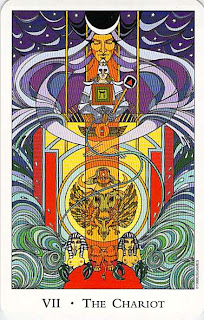 [from the Tarot of the Sephiroth]

When inner work is brought out into the world—a poem, a memoir—it’s as though something has been constructed in the soul. The inexpressible finds expression; the unsayable is said. I’ve been reflecting on this experience, which feels magical to me—transformative. It’s not just the writing down of inner experience, the process of tracking dreams or engaging in active imagination. It is how it feels to go public with it, to present it to a live audience, or to see its transformation into print. An imaginal space is opened up and something is created there—a temple deep in the woods, past the swinging bridge, or perhaps an altar by the banks of the river, a chupah for the sacred wedding, a teepee in the meadow. This is a holy place to which one can return. It is both an expansion of inner space and creation of something substantive. Is this what the alchemists mean by the Lapis? The Kabbalists by the “Work of the Chariot?” The Hindus by Shakti? The Jungians by the Subtle Body?

The Sister from Below, my muse, informed me that I was writing Jungian memoir when I was working on her book. She told me that Jungian memoir illuminates the inner world, follows the Jungian tributaries of dreams, conversations with inner figures, synchronicities. It is the grandchild of Jung’s great memoir, Memories, Dreams, Reflections. Its ancestors include the alchemists and the saints, whose spiritual autobiographies, like the Confessions of St. Augustine, connect us to the Spirit of the Depths, and to the Wisdom Traditions.

Since the publication of the Red Book it’s become clear how Jung’s direct confrontation with inner figures cracked open the walls of rationality and allowed the uncanny, the unfathomable back into western consciousness. Jungian memoir attends to those strange unfathomable experiences that shape our souls.

I was privileged, last April, to participate in a conference put on by the C.G. Jung Institute of San Francisco, called C.G. Jung and the Jewish Connection. This was the swan song of our beloved Baruch Gould, who had been the creative and innovative Director of Public Programs for ten years, and was preparing to end his service. He’d been incubating the idea for the conference for years.

I was among a group of Jungian analysts and scholars approaching the subject from very different vantage points. There were historical papers, papers on Jung and Jewish mysticism, and papers I would call Jungian memoir, telling personal stories from inner lives. Several spoke as Jews struggling with Jung. I spoke as a Jungian struggling with Judaism. The Jungian memoir I wrote for that event has opened an important space in my soul, a deeper and more open connection to myself as a Jew and to Jewish mysticism—a Chupah for the sacred wedding of Tifereth with Malkuth— male and female energies in the Kabbalistic worldview—which Jung saw in a vision of the “Garden of Pomegranates” and described in Memories, Dreams, Reflections.

Now, thanks to the Jung Journal, all the papers given at the conference are available in print (Volume VI, Number 1). I hope you’ll take a look at them.


Here are some excerpts from my paper.

The Rabbi, the Goddess, and Jung

You cannot grasp these things unless you stumble over them.

How does a Jew to whom God never spoke in a synagogue, who has wandered the world and the paths of other religions seeking direct experience of the sacred, stumble upon it in her own tradition? How does a spiritual exile, whose life was transformed by the Goddess, get past her issues with the patriarchal God of the Jews.

This is the story of how Jung, or the Jungian worldview, helped me find my meandering way home to Judaism. As is my fashion I will weave in poetry, dreams, a journey and a conversation with a ghost.

I have always longed for myth, for mystery, for those moments when the world cracks open, when something uncanny, wild, awesome, enters. I have glimpsed it in Hindu temples, in Catholic churches, in Pagan rituals, in poetry, everywhere but in the Jewish world I knew as a child…

The Ten Commandments of My Childhood

It was a proud thing to be a Jew in my family of origin; it was also a difficult thing. We Jews had responsibilities. We had suffered as a people. We needed to be eternally vigilant, on the look out for tyranny, oppression, discrimination— whether against us Jews or others. There were unspoken instructions for how to be a good Jew below the surface of dinner table conversations, and in social gatherings in the very Jewish neighborhood in post war Queens, New York, we lived in during the early 1950s. These are the commandments I heard:

I was given a gift of a dream. I am shown an image. It is an upside down tree—whose branches touch the earth, whose roots are in the sky. The tree is filled with Hebrew letters. I did not recognize what it was, at the time, though the image stayed with me, tugged at me…[It took me some time to realize that I had] been shown the Tree of Life—the symbolic expression of Jewish mysticism. I [had] stumbled into the esoteric aspect of my own tradition, which I had thought lacked a mystical, contemplative side.…


[Upside Down Tree of Life by Robert Fludd]

It must be She, the Shekina, who is behind what happens next. In September of 2004 I find myself in Girona, Spain. My husband Dan and I have come here because it was a center of Jewish life and Kabbalistic thought before the expulsion of the Jews …

I sit on the tiny balcony of our hotel room, and try to focus…despite the sounds of passing people, cars, motorcycles, water being poured, conversations in Spanish, Catalan, Italian, English, despite the bells of the Cathedral. I imagine the rabbis meditating—making contact with God amidst donkey piss and roosters crowing and children running about and bed pans being emptied.

In my wanderings in the old Jewish section of Girona I happen into the Nahmanides Institute of Jewish Studies. I learn that Moses ben Nahman (nicknamed Ramban by the Jews, called Nahmanides in the Greek fashion of the day) was a leading Kabbalist in the 13th century in Girona. He was of the generation before the Zohar was written down, and one of those who influenced its writer, Moses de Leon. 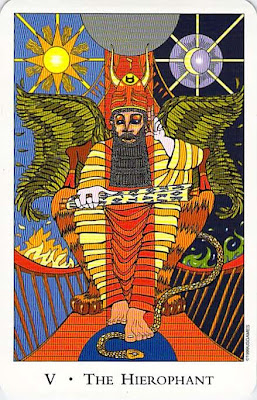 [from Tarot of the Sephiroth]

I am filled with the presence of this Rabbi. Later, in my readings, I will stumble upon a reference to a Jewish myth in which “the soul of a great sage who has died binds his spirit to one of the living in order…to guide a person through a difficult time of transition.” This spirit is called an ibur, in contrast to the malevolent spirit known as a dybbuk.

I find myself talking to him: Ramban, I walk the Roman walls of your city and your light walks with me. I walk the narrow streets of the Call de Jueu and the light you received from Moses at Sinai walks with me. You speak in my heart. This light, you tell me, is not of memory, not of the history of our people, not the word remembered and written down. This light is now…

I wonder why it is you who have come to guide me, you who are at once a mystic and a learned Rabbi of the tradition. You say it is because I need to learn your teaching, that “Everything that is done in the mundane sphere is magically reflected in the upper region…” You say I listen too much to my fears. I need to open all my senses to the Shekina. You say I need to contemplate the mystery of “black fire written on white fire —the tension between the oral tradition and the radiance, between manifest wisdom and the transcendent. Because you want me to understand that the Goddess is alive in you, that The Sister from Below is your familiar, you tell me a stanza of your mystical hymn about the birth of the soul.

He radiated light to bring her forth,
In hidden well–springs, right and left.
The soul descended the ladder of heaven,
From the primeval pool of Siloam to the garden of the King.

You say our souls stand in eternity, they are forever, we spend our lives finding our way back to them, for we are in exile from our beginnings. You say the light is now, here in this place where we meet.

I wrote a poem for Ramban, who became a beloved familiar in the writing of this paper. Here is the last section: 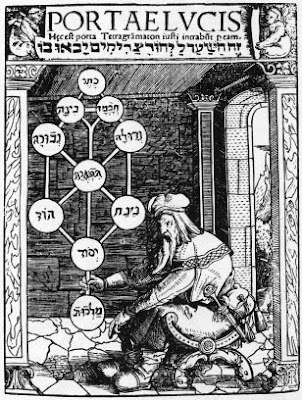 Frontpiece from the 1516 Latin translation of Gikatilla's Gates of Light