The Muse of Endurance

The Poetry of Resistance V


We live in a strange dissociated time, in a warped land. We’ve spent a year in fear—demonstrating, raging at the TV, looking for saviors. I see none on the horizon. We’ve had some victories, in Virginia and in Alabama. The Russia Investigation grinds on. But we’ve had to watch so much we value slashed, decimated—Bear’s Ears, The Arctic National Refuge, Obamacare, DACA, Civil Rights, abortion rights, the Paris Climate agreement. We’ve seen extreme weather events. Texas has never seen as much rain as Harvey dumped on it. California has never seen a wildfire as huge and unstoppable as the Thomas fire in Ventura. The coast of Louisiana is washing away. Puerto Rico suffered two hurricanes in a row—Irma and Maria—which knocked out the power grid for months. Hospitals couldn’t function, water and food was scarce. Pleas for help from Puerto Rican officials like Carmen Yulín Cruz—the feisty mayor of San Juan—were met with disdain and insults by our berserker president, throwing paper towels and blaming the people of the island for their troubles. Cruz responded: “You can’t handle the truth.”


The truth is—the intensity of these catastrophes is symptomatic of climate change; we can expect more. The truth is—he whom we prefer not to name is a master of hocus-pocus and deceit. He manipulates the news with incessant provocative tweeting, causing political storms and wildfires as he shamelessly exults in public about how rich the Wall Street tax cut will make his cronies, and of course, himself. We are at risk for burning ourselves out with outrage. The greed that stalks the land is mind boggling. What has become of caring for the poor, the homeless, the sick, the stranger? What has become of Dr. King’s arc toward justice? What about our souls? 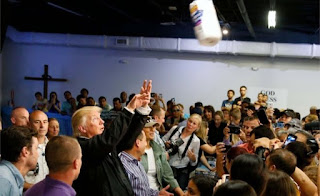 In this dark time of the year I see a sea change in myself and in those I know. We are withdrawing into ourselves, connecting with our deep roots, our souls—not in defeat—but in order to endure. We are remembering how essential it is to tend our intimate lives, our families, our friends and our dreams. Dan and I take walks, watch “Stranger Things,” see children and grandchildren, make soup with root vegetables. Dan spends time texting “Rapid Resist” messages to organize the resistance. I spend time reading, writing and teaching “poems of resistance.” But I can feel how the center of our lives has dropped down to the vital and the eternal, far below the “noise and whip of the whirlwind.”

Gwendolyn Brooks is good medicine right about now. Her “Sermons on the Warpland” feed my soul and remind me of the importance of tending one’s “blooming.” She wrote these poems 50 years ago, in times which brought civil rights to national attention and in which we suffered the assassinations of Medgar Evers, Malcolm X, Martin Luther King and Robert Kennedy. She reminds us that we’ve been through terrible times before. She asks a question that is painfully relevant today: “what must our Season be, which starts from Fear?” Not much.

Night Blooming
The time
cracks into furious flower. Lifts its face
all unashamed.
—Gwendolyn Brooks
“The Second Sermon on the Warpland”


Brooks’ “Sermons on the Warpland” are blunt and truth telling. She is preaching to her own people, to “Big Bessie” whose “feet hurt like nobody’s business,” but who “stands/in the wild weed…a citizen.” In the first “Sermon” Brooks urges her brothers and sisters to “build your church…With love like lion–eyes./ With love like morningrise.” It is a love poem to a people who have not been treated with much love in a land still warped by slavery and Jim Crow. These “Sermons” are poems of direct address, of exhortation; they speak to the power of endurance and seem to me to be especially pertinent in our times. 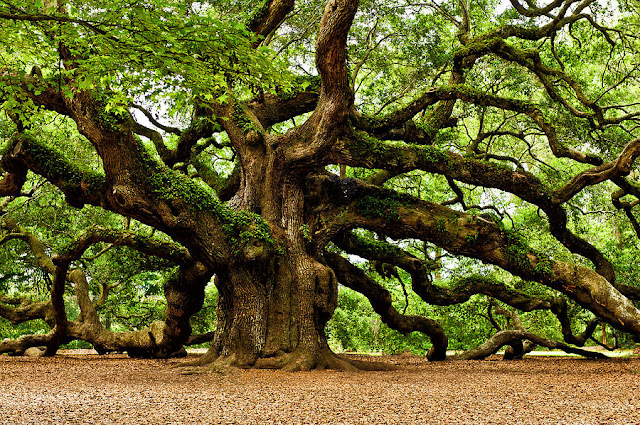 Endurance takes many forms. My friend and poetry buddy Rich Messer sent me a poem recently that takes a more subtle, slant approach to resistance and to endurance. The word “endure” is related to Old English and Old German word roots for “true, “trust,” “tree” and “Druid.” This linguistic kinship web connects us to our pagan, oak seer roots, to the spirit of the earth, to our animal familiars, and to our ghosts. Messer’s poem is an example of what Jane Hirshfield, borrowing from Emily Dickinson, means with the phrase: “Tell All the Truth but Tell It Slant” in the American PoetryReview, Sept/Oct. 2017. Hirshfield writes:

Good poems travel in ways that are strongly or subtly, meandering, askew, counter, extravagant, peculiar, free, and freeing. Their pelts are freckled. They loosen the map lines of the literal, underslip narrowness, and let us see more than would be possible by looking at things directly. They are raids on reality that allow raids on the heart. They are lies whose intention is truth exposed more fully.

That glorious freckled pelt is camouflage. “So it is with poems,” says Hirshfield, arguing that “any good poem has lurking somewhere about it the Houdini–esque energies of the Trickster…” 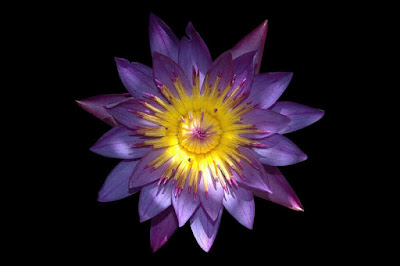 up the beach and memories retreat

unrecognized. It happened. We went on,

the back door, to whistle home the dogs.


There are people who do not begin

and end each day, glued to the screen.

There are people who sit quietly

in their living rooms, doing nothing

before bed. These people did not

They speak to each other and know

wisdom and joy. I swear this to you.

swallowed by a glacier, nudged farther


When I sit late at night

with all my animal familiars and ghosts,

the news whispered around the circle

avoids his name. The things


we love we lose.

Who will take care of the garden?

"Night Blooming" is achingly sad, lyrical, tender, deep. The first stanza casts a calm, meditative spell on us, transports us gently into a realm of fading anniversaries, waves on the beach and memories. Things happened. “We went on.” We are in the world of the aging, watching the cycles of life. What makes us “uneasy” is not named, but it casts a shadow. What feels most vital is “to whistle home the dogs,” our loyal animal familiars. 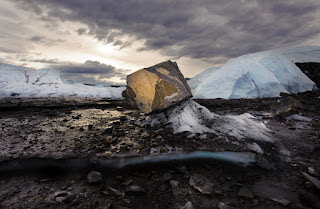 Messer moves on to a subject more complex than growing old. We are in a political poem about endurance in dreadful times which avoids all political language and reference. The poem’s speaker describes a people who have not lost their way in the “Season…of Fear," a people “who do not begin/and end each day, glued to the screen…/These people did not/follow our leader down to the dark waters." They are not complicit. There is a hint of biblical language in "the dark waters,” a sense of mystery. We are told of a people who continue to live soulful lives with "wisdom and joy." By the end of the second stanza the calm tone of the poem has risen to a passionate oath—"I swear this to you." We, the readers, receive the speaker’s intensity with relief. We are no longer in a warped land. We haven’t blindly “followed the leader” into danger and deception. We want to join this wise and joyful tribe, or rather—through the poem’s magic—we have become part of the tribe.

Here is where Messer’s trickster comes in, and, to borrow from Hirshfield’s language, “punctuate[s] pomposity and shake[s] things up.”


Our peaceful moment among trustworthy folk is, lest we take ourselves too seriously, unhinged. The wily speaker casts another spell, turning us into "boulders/swallowed by a glacier, nudged farther/south every year." We haven’t been able to escape the fate of our times after all. We are pushed around by climate change like everything and everyone else. We do have to face our terrors, even if—like boulders— we endure. As Hirshfield says: “Trickster stories…make spells to break the spells that…grip us.”

In the fourth stanza we return to the eternal realm, the realm of what Jung calls the “Spirit of the Depths.” The poem’s speaker has shifted from the first person plural to the first person singular. Does he want to be alone with his late night blooming? Is he casting us out? We are uneasy again, as we were in the first stanza. The real news, it seems, comes from “animal familiars and ghosts,” who avoid “his name.” Of course, in true trickster sleight of hand fashion, to announce that his name is being avoided is to bring the unnamable one into the poem and the circle, while, at the same time, diminishing him, casting him out of the great cycles of life and death, and the terrible truth that “the things//we love we lose.”


Remember, he can’t face the truth. The trickster voice of the poem has put a spell on us, and out tricked our ephemeral trickster president. The poem resists the times, resists the screens, hangs out with dogs and with ghosts, and faces the ultimate loss, our lives, with that marvelous last line—"Who will take care of the garden?"

She Who Dances with Veils
It was the summer of ’43. What did my young parents know
about the Europe they’d fled


A poem of my own has just been published in the online journal Front Porch. It too is a “slant” poem, a trickster poem of resistance, which refers only tangentially to the “evil spirits” that spook our times. Like Messer’s poem it undermines the fearful “Spirit of the Times” by casting a larger view of life as seen from an ancient cave: “Your little life and mine in the flow/of all the mothers of mothers the grandmothers of magic/the daughters of ritual skill.” The poem invokes Maia, the goddess of illusion, creation and imagination—herself a trickster. I hope you’ll check it out. 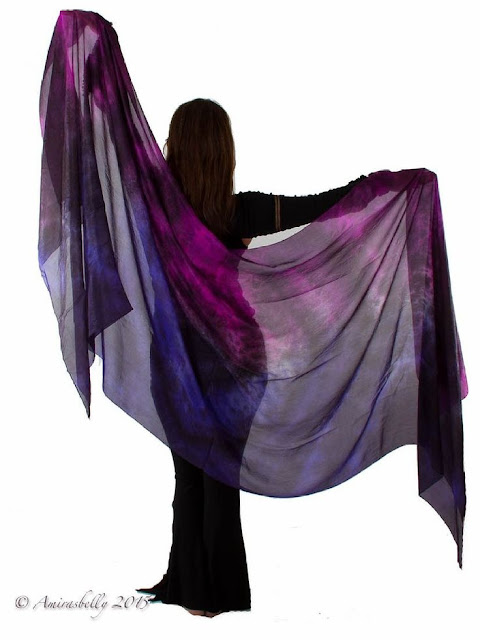