The Muse of Good News 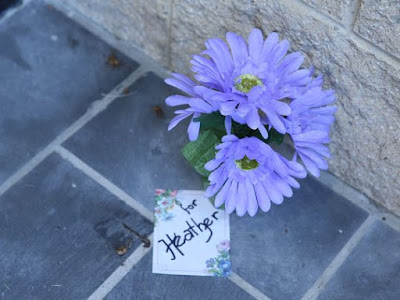 In Bad Times
Good news is essential medicine, especially in bad times. We live in outraged, heartbroken, burnt out times as we pass through the first anniversary of the Charlottesville white supremacist rally that turned deadly. Susan Bro, mother of Heather Heyer, the young woman who was killed by a neo-Nazi backing driving into a peaceful counter demonstration, was on the radio. She has created a foundation, with the help of many who mourn her daughter, which will provide scholarships to young people with Heather’s activist values. Heather understood about inequality and racism. Her mother wants her legacy to grow and thrive. Bro said:


Unfortunately, we’re still at such a racial divide that it took a white girl dying for white people to wakeup and pay attention," she said. People of color, she said, "have been fighting this fight for many years – this is not news to them.

In the way that good can sometimes emerge out of horror, the white supremacist rally that was organized on the anniversary of Charlottesville at Lafayette Square in Washington D.C., not far from the White House, was a bust for the alt–right. Only some two-dozen people showed up. It was a triumph for the counter demonstrators who were thousands strong, and who shifted the conversation to the real issues of mass incarceration, inequality, and systemic racism. 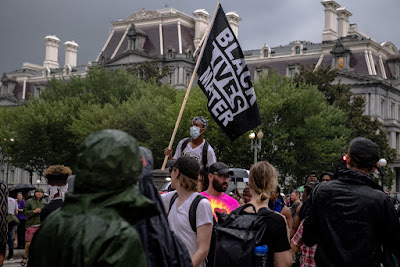 Holy Smoke!
Meanwhile, back on the west coast, California is on fire, again. At last count twenty fires were burning all over our state. They intrude on our state of mind, trigger memories of last October’s fires, of dear friends who lost their home. Smoke fills the air, makes it hard to breath, smothers our sacred Mount Diablo, drapes the sky in veils of ash. What have we done to our earth? Who came up with the name “holy” for that fire in Orange County? Holy smoke! Holy terror! Holy moly! Holy cow! Holy crap on a cracker!

The word holy comes from word roots than mean whole, heal, health, and sacred. Fire is a dangerous god, demanding sacrifice, an essential god who warms the hearth, an out of control god who reminds us how little control we have, a healing god who opens seed pods in the forest, growing new life. How to keep faith with such a god when our world is in flames and the Holy Fire threatens our way of life. The governor says: “this is the new normal.” He knows, what our president refuses to acknowledge, that fires in the west and floods in the east are, at least partially, a function of climate change. 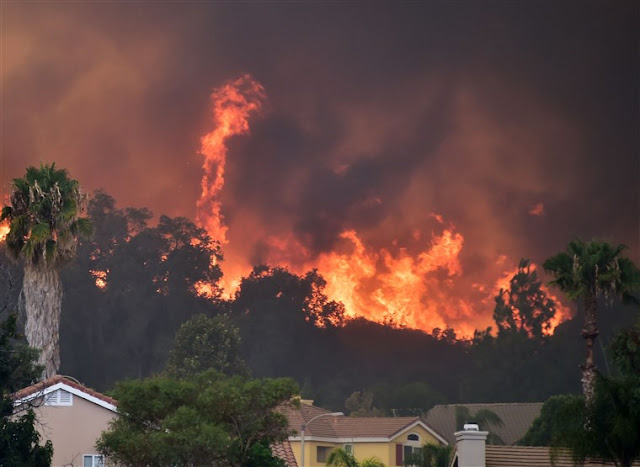 I find myself responding gratefully to small stories of good news. The word “good” comes from roots meaning to unite, to gather, to bring together, as Susan Bro is working to do in her daughter’s name, as the firefighters are doing as they work to contain gigantic flames. The word “news,” of course, speaks to what Jung called “The Spirit of the Times,” the New, the Now. There are many oases of goodness in our lives. The Heather Heyer Foundation is good news. The counter demonstrators at Lafayette Square are good news. The firefighters who fight for our wildlands and homes are good news. We need to remember the values of unity, of gathering together in this fractured moment in our history. Here are a few of my recent “good news” experiences.

Holy Vegetables
In Broad Ripple, a magical section of Indianapolis along the Monon Rail Trail, where there is no longer a train, but where people run, bike, walk, push their strollers past beautiful vegetable gardens, where chard, kale, basil, and beets reach luminous leaves to the sun amidst marigolds and other flowering plants which attract the honeybees whose hive is tucked in among all the vegetative glory. Butterflies dance in the warm air; young mothers push their baby carriages into the Public Greens, the restaurant side of this idyllic farm–to– table tableaux. 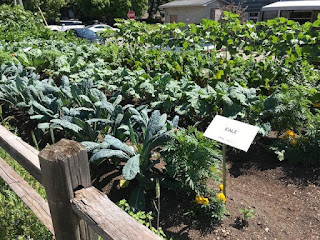 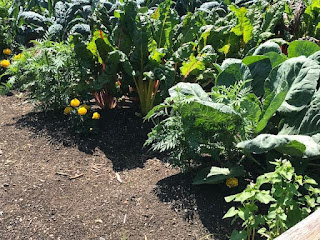 It’s Saturday. Brunch is being served. The young mothers and fathers have brought their babies into the restaurant. They will have eggs cooked with fresh greens, herbs and tomatoes from the garden—a treat for them after sleepless nights and too much to do. 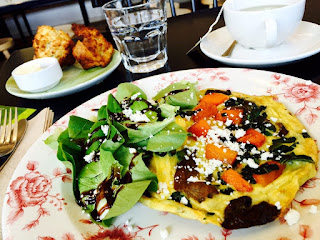 It’s our first time back to this restaurant since Mother died. We’ve come to visit family, and we feel the big hole in our midst. But here, watching a toddler pull his little book out of his mother’s bag with intense focus, I feel my mother’s pleasure in young children. I’m moved by the values expressed in this place, which in conjunction with the Patachou Foundation is feeding the children who suffer food inequality in this town. 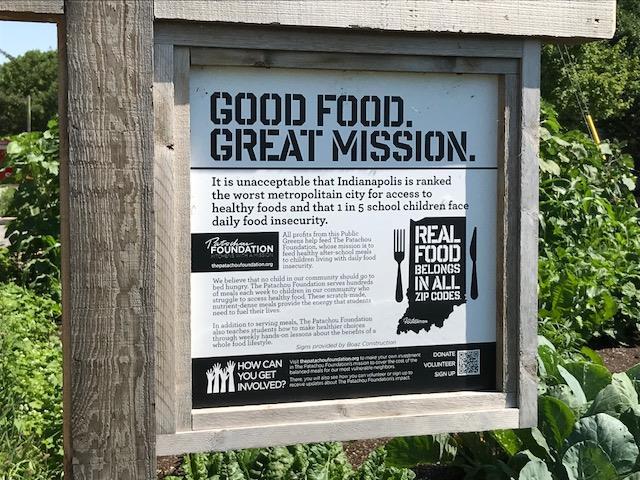 Mother, if I could visit you as you used to be, I’d take so much pleasure in telling you about this program of the Public Greens, the tote bags for sale that say: “Real Food Belongs in All Zip Codes.” I can see your eyes brighten, a smile crease your face. If you were here with me, you’d turn yourself toward the little ones, sit quietly, and the children would be drawn to you like bees to a flower. They’d show you their favorite book, their teddy, their binky. You’d emit that sweet observant calm I miss so much. You’d murmur something and they would respond with all the language they have. On the way out you would exclaim about the glowing health of the chard, the tomatoes, the flowers. You’d watch the beekeeper put on her white veil to open the hive and gather honey. “It is so beautiful here” you would say. I would agree, and we would wander together through Broad Ripple, along the Monon trail, and that great empty hole in me would be filled with your presence. 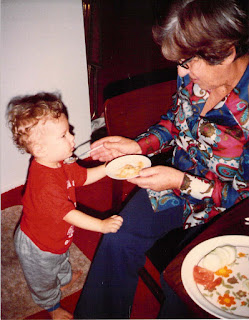 One Nation, Indivisible
I don’t usually love the Fourth of July. I hate firecrackers. They seem crazy dangerous to me in our parched land. I don’t like jingoism and patriotic flag waving. But Dan prevailed upon me to join him at the Fourth of July parade in our small suburban town of Pleasant Hill. Dan is the activist in the family. He knows everyone in the political life of this town, shows up often at City Council meetings and was instrumental in the City Council's creating a "welcoming" policy toward immigrants, meaning that the police won’t co-operate with ICE in deporting or holding immigrants unless the immigrant has committed a serious crime. He goes to meetings and tells our refugee family stories of illegal immigration, how his father went AWOL from the anti–Semitic Polish army as a young man, and stole his way to America with false papers, how my parents and grandparents stole their way out of Nazi Europe, with false papers, had to live in Cuba for 18 months because the US was not letting Jews in, and eventually made their way to America.

Dan enticed me to come with him to the parade by saying we‘d be walking with the “Indivisible” float. Indivisible is a grassroots progressive political movement to engage people in the political process at a local level and stir up resistance to current administration policies. Its name connotes the goodness of gathering together to save our democracy, and to work for “liberty and justice for all.” Those are words we’ve often said automatically. How consequential they seem to us now. I’ve heard many stories from Dan about Indivisible and its brilliant women leaders. They are good news.

That’s how I found myself walking with members of our family, waving flags, and handing out red white and blue plastic leis to a diverse and good humored crowd full of families with young children and oldsters sitting on fold up chairs. The Indivisible float was not supposed to be overtly political, so the theme of the “Blue Wave” was translated into a glittering, glowing beach scene draped over someone’s truck. Turns out those brilliant women are also creative. 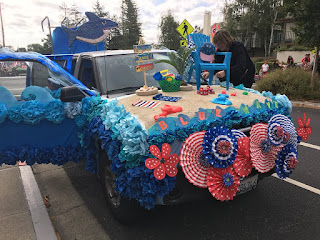 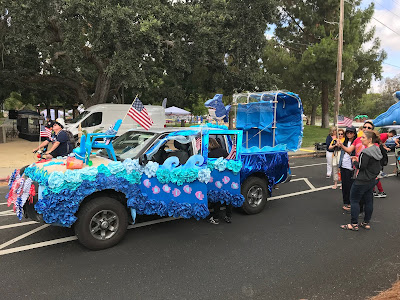 The best news for me, however, was the sight of a patrol car rolling slowly along, filled with brown skinned children laughing and waving, looking entirely at ease with their policeman host. The best news for Indivisible was: they won the prize for best float!

Holy Moly!
Who could have predicted this? Alexandria Ocasio-Cortez, a 28-year-old first generation Puerto Rican, ran against a well-established congressman, Joe Crowley from Queens, NY, and won. She calls herself a democratic socialist, worked for Bernie Sanders in the 2016 election, stands for Health Care for All, College for All. She speaks truth to power, hope to fearful ruts of consciousness; she says:


It’s not OK to put donors before your community.
This nation is never too broken to fix.
We have to do this together.

The 16 year old socialist in my soul, the one whose heart throb was the early twentieth century socialist candidate for president Eugene Debs, is cheering wildly. She has, over the years, been drowned out by the sadder but wiser voice of my mature self. Now she’s holding forth like the Parkland kids:

Why can’t we stop gun violence? Why can’t we have health care and college for all? Why shouldn’t we have a big shift to the left in this crucial moment in our democracy? Your democratic party has been shifting right for decades. Ocasio-Cortez is a new kind of socialist, not ideological. She speaks from the heart. She’s down to earth: she’s pragmatic. And anyway both you and Dan come from her district, you both lived in Queens as children. Eugene Debs ran on the socialist ticket five times. He said things that are so true today, a hundred years later:


I am opposing a social order in which it is possible for one man who does absolutely nothing that is useful to amass a fortune of hundreds of millions of dollars, while millions of men and women who work all the days of their lives secure barely enough for a wretched existence.

To stir the masses, to appeal to their higher, better selves, to set them thinking for themselves, and to hold ever before them the ideal of mutual kindness and good will, based upon mutual interests, is to render real service to the cause of humanity.

Do something for me, the young socialist in your soul, who hasn’t had a voice for decades: Give Ocasio-Cortez the last word in this blog, for she is truly good news! 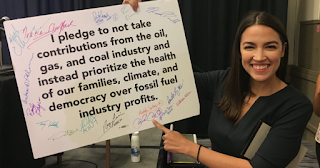