News from the Muse: The Muse of Persimmons 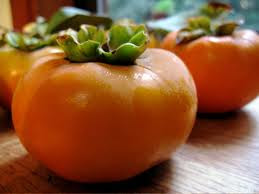 True joy is simple: it comes and exists from itself, and is not to be sought....All you must do is fulfill your task.
C.G. Jung in The Red Book


The news from the muse is persimmons. The little tree in front of our house is aglow with them. The joy they give me is a surprise. Persimmons are new to me. I never paid much attention to them. I’m a summer fruit kind of girl. Give me a juicy peach, a sassy apricot and I’m happy.

When Dan and I moved into our town house a few years ago, the father of the seller showed us the garden he had tended. His name was Mohammed. We gathered his son and daughter-in-law were not interested in roses and trees. He introduced us to the persimmon he had planted. It had not yet borne fruit.

Mohammed was gaunt, dark eyed, white haired. He told us he was from Bosnia. I wondered what he had been through. We’d followed, with horror, the terrible stories of war and genocide in the ‘90s. As the daughter of refugees, I identify with refugees. I wrote a poem during those years about that identification. It’s in Adagio & Lamentation.

do you remember how the words grew axe heads?


all night my love you shook the bed
were you walking through the mountains to Albania?
dancing on a bridge in Belgrade?

O son of the mother
what have you done with the bones
of our grandparents?

the angel passed over our house
nobody

came to the door
in a black ski mask
nobody

under the fruit trees 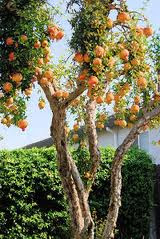 Persimmons came a few years later. Nothing prepared me for their glory--how they filled the tree with golden suns, how they tasted--subtle, nutty, wise. A strange thing to say about a fruit, but I find myself musing--if there were a garden of maturity, a garden of the fruit of ripeness, the tree of late life would be a persimmon.

Whenever Dan brings a handful of the elegant fruit into the house, I think of Mohammed--how moved I was by him. His son liked fast cars and motorcycles. His daughter-in-law liked shoes and boots with spikey heels. We’d seen the signs of these obsessions when we first looked at the house. They’d painted the place in blazing colors--orange, metallic blue, yellow. We changed all that. But the gifts of Mohammed, who had tended the roses, planted the persimmon, continue to nurture us and give us joy. His children have gone on to bigger and better in America. Does Mohammed remember his persimmon tree? Does he have any idea of the treasure he has left us? 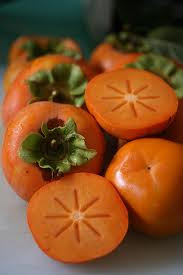 I muse about the magic of persimmons. What makes them so enchanting to me? Is it that, when you cut them open, you see a design in the shape of a mandala? Is it that they look like tiny suns, or like the orb the Emperor holds in the Tarot Deck? Is it that like me, like Mohammed, they are wanderers? They came originally from China, wandered to Japan where they’ve become the most beloved of fruits, before they made their way to the new world. Is it that they belong to a genus--Diospyros--which means fruit of the gods?

The joy I feel at the sight of the luminous persimmon tree reminds me of a dream I had some years ago, of a tree filled with golden flowers. The dream took me back to Jung’s essay--a Commentary on the Secret of the Golden Flower--which is an ancient Chinese alchemical text. Jung writes: “The Golden Flower is the light and the light of heaven is the Tao.” The Tao is mysterious. It has brought golden fruit of the gods from China to my front garden in America via an old man from Bosnia.

I wish my Oma were here to paint the persimmons--perhaps a still life with glowing fruit on a silver tray, a bowl and its shadow nearby. Perhaps she’s paint the treeits branches weighed down by the golden fruit. In the middle of the night I remember that we found a painting by her, of persimmons, last time we visited my mother. She did not paint the Fuyu persimmons we’re enjoying. Hers are Hachiya persimmons. But they too, are magical. 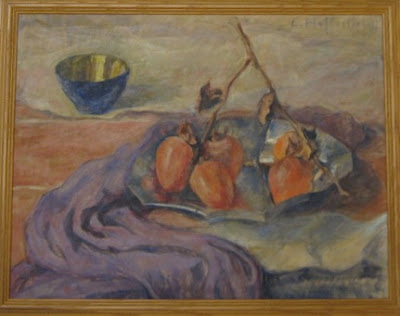 Painting by Emma Hoffman
I wish I could give Mohammed a basket of his persimmons. Instead I wrote him a poem.


TO AN OLD MAN FROM BOSNIA

I never expected persimmons.
That tree you planted—
before this became our home—

was a stick in the winter mud.
Your name, you said, was Mohammed
I wonder what lies behind you.

You tended your son’s garden—
what he loved was—
fast cars.

clusters of hard green fruit, turning gold.
I’d not known persimmons
their taste from another world

the splendor they steal from the sun.
I wish we could talk.
We could walk in the garden

admiring your plantings.
I’ve been wanting to tell you, Mohammed
I never expected persimmons.
Posted by Dan at 2:17 PM