News from the Muse: The Muse of Ekphrasis

The Muse of Ekphrasis

I see behind the mirror of your eyes, the crush of dangerous shadows, the dead, who look greedily through the empty sockets of your eyes, who moan and hope to gather up through you all the loose ends of the ages…. C.G. Jung, The Red Book 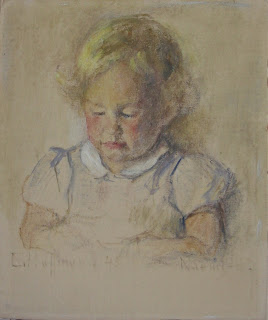 Jung’s relationship to the dead has always spoken to me. He understood that the dead and the living need one another--the dead give the living purpose and past; the living give the dead hands and eyes. This is how it has been between me and the spirit of my grandmother, the painter Emma Hoffman. I blog about her frequently. She is one of my spirit guides.

When I was a child I knew her as Oma. She painted me as a toddler, full of light. I was the first grandchild born after years of wandering, years of catastrophe. She told me her stories of loss--the loss of three of her children, the loos of her home in the hills above Kassel, the loss of her country, Germany. She, her husband and her surviving children fled the Nazis during the 1930s. I remember how her eyes went fierce and inward as she painted. Oma showed me that making art can be a way to transmute grief, a way to bear the unbearable.

There is a loose end that troubles us both. Her paintings live on after her in my home, my mother’s home, the homes of my brothers and cousins in Israel, the homes of distant kin with whom I’ve lost touch. But her spirit looks through me and wonders:

Emma Hoffman was a fine painter. It’s not just her family who thinks so. The art historian Alfred Neumayer, who taught at Mills College in the 1950s and ‘60s was an admirer of her work. He wrote of her:


She studied from 1901 to 1903 under the best painter then available in the German Capital, Lovis Corinth. This means she was guided toward an Impressionist style since her beginning. She remained faithful to it, yet developed an ever lighter palette and an increasingly spontaneous brushwork.

When I saw the “Birth of Impressionism” show at the De Young Museum in San Francisco, I could see what Neumayer meant--the flow of light in Monet reminds me of Oma’s work. Consider, for example, the watercolor on the cover of my poetry book Adagio & Lamentation. 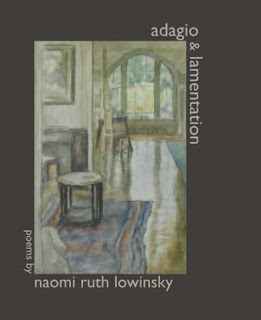 After this watercolor made its way so gracefully to the cover of Adagio, thanks to my husband Dan’s photo and my publisher, Mel Mathews' elegant design, Oma’s spirit was aroused. She loved having her painting out in the world. I told her I’ve always thought she should get more recognition. Maybe someday I would find a graduate student in Art History who would want to study her. Someday never came. Finally my grandmother’s spirit confronted me and said: You write poems and books, you give lectures, you knew me and my work. This is for you to do, not for some graduate student.

I spent much time last summer intensely studying her work. I put her pain filled self portrait in my study, on the very easel she had used. 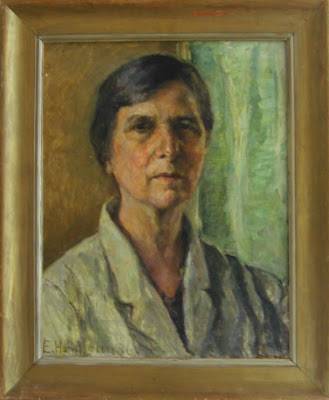 It spoke to me. I studied other paintings of hers, some were in my possession, some I had photos of, thanks to Dan’s help. A suite of poems emerged.

There is a fancy Greek name for this sort of poem--Ekphrasis--poetry that responds to art. It has a long history going back to Homer’s description of Achilles shield in the Iliad. Keats’ “Ode on a Grecian Urn” is a famous example. I had never before been drawn to write Ekphrastic poems. Suddenly I found them very compelling.

I worried about who would be willing to publish these poems with their paintings, since most poetry magazines operate on a shoestring and color images are so expensive. When Lucy Day the publisher of Scarlet Tanager Books, which published my first two poetry collections invited me to submit poems to an international online magazine Levure Litteraire, I thought of that suite of poems and paintings. It’s no big deal putting images on line. Lucy was all for it. So was Rodica Draghincescu, the editor of Levure.

A few days ago appeared in my inbox. I was excited. I spoke to the spirit of my Oma and told her her loose ends could stop flapping--seven of her paintings, eight of my poems in response to her paintings, were out in virtual space. The spirit of my Oma roused me in the wee hours of the night. She was all astir. Where is virtual space? she wondered. She died before personal computers, before the Internet, before e-zines.

The ancients ones say it is important to feed the dead. I thought I was feeding my Oma with this tribute. People all over the world can now see some of her paintings. Why doesn’t this settle her down, give her some peace?

The spirit of my grandmother says: It’s not in the nature of spirits to settle down. We’re always in motion. We’re part of the flow behind the curtain of what you know. Maybe you’re the one who needs to settle down. This is just as much about your life work, your aging, your flapping loose ends as about mine.

Whew. A Zen slap from a spirit. She always did have those piercing eyes that saw right through me. She painted me, age 14, scared of my life. I wrote a poem in response to that painting. 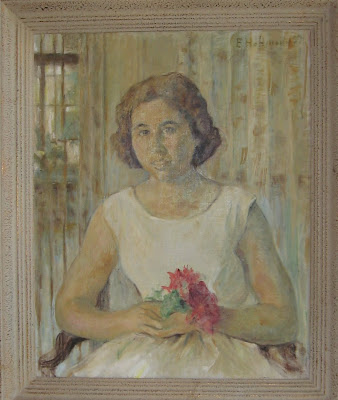 Although I don’t enjoy
Looking at you—a clogged life
In a white dress, holding red flowers—

(Oma must have thrust
Those blood blooms
Into your haunted hands)

Although the music’s
gone underground, and you’ve lost
That wild horse you used to ride

Before you learn
The sanctity
Of your own red room

Of canvas—there is an open
Window, a hint
Of radiance, a glimpse

Of green trees—
You can’t see it yet, but
Oma has painted
Your way out…

I did not know until I wrote this poem that Oma had painted my way out of collective trauma, ushered me into the imaginal realm that has been my salvation. What began as a wish to honor my grandmother’s life work, has become a deeper recognition of how she and I continue to shape one another.

Of course, the fact that my poems and her paintings are together, on the virtual pages of an international publication, does not solve the problem of how her work will be gathered and appreciated after I’m gone. But it does allow you, dear reader, to see some of her work. Here’s the virtual path: click the link http://www.levurelitteraire.com, then scroll down the right side of the page to "Multilinguisme/Languages," click on it, click on English, then on my name, Naomi Ruth Lowinsky.
Posted by Dan at 1:40 PM