Muse of the Wild Girl

Daddy says, up above the levee on the dry side, they’re afraid of the water like a bunch of babies.

Hushpuppy in “Beasts of the Southern Wild” 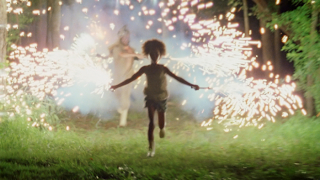 When people cover the earth with concrete, they close off its secret workings, making everyone so vulnerable to the void that they have to keep moving quickly. 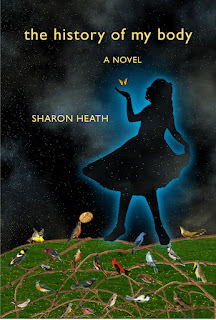 These wild girls talk straight to your heart. They talk to you as if they’ve known you all their lives, as if you are their make-believe friend, a part of their inner world. They are children of this time and of all time. They know the ways of wild creatures, plants, trees, rivers. They contemplate the workings of the universe and of the tides. They understand what’s lost when wildness is covered over by concrete, or segregated by levees. They speak directly to the wild girl in you and in me. I wanted to be Rima of the Jungle, swinging from tree to tree, speaking in the language of the birds when I was a girl.

Just listen to Hushpuppy, in the amazing film “Beasts of the Southern Wild,” directed by 28 year old Benh Zeitlin. She speaks in a lyrical six-year old voice-over. She says: “The whole universe depends on everything fitting together just right. If one thing busts, even a smallest thing, the whole universe will get busted." 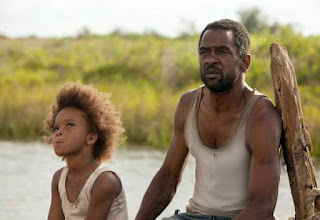 Of course, like the rest of us, her universe is unraveling rapidly. She lives with her Daddy in the wilds of the Louisiana bayou, in a mythical place called “The Bathtub.” She has an ecological imagination, fertilized by Miss Bathsheba, her teacher, who tells the children tales of the Aurochs, great hairy pigs with huge tusks from before the last Ice Age, who will be resurrected as the polar ice melts. Hushpuppy sees the ice caps melting, she hears the Aurochs thundering over the landscape. So do we in the movie audience—awe-struck and fearful in the presence of these threatening images. Hushpuppy knows she is just a “little piece of a big big universe.” But she wants to survive, to leave her mark so that in a million years school children will know that once “there was a Hushpuppy who lived in the Bathtub with her Daddy.” Her Daddy, however, is dying. His blood, he tells her, is eating itself. Hushpuppy, like the rest of us, has to face the unknown. Her fierce spirit gives me hope in our scary times, as the climate warms and the oceans rise. I hope you’ll meet her soon.

Fleur is another wild girl who has visited me recently. She is the first person narrator in the amazing novel by Sharon Heath, “The History of My Body.” Within the first two pages we’ve been hurled from God’s creation of the world, as in Genesis, to Fleur’s genesis—a burger and a good screw involving her father, the virulently anti-abortionist Senator and his too-young date—now a “drowning woman clutching her wine glass like a life raft.” By page two we know that Fleur’s father thinks she is autistic. Is she?

She’s weird, that’s true. She spins, whirls and flaps when she’s upset. She’s precocious, a brilliant observer of everything around her, a tireless maker of lists. She’s been reading the dictionary and encyclopedia since she was potty trained. She’s potty mouthed and wild and never stops talking. And she’s hilarious. Her caretakers include the kind but odoriferous Sister Flatulencia. Her best buddies are her grandfather and her cat Jillily. Her grandfather had a stroke and doesn’t talk. But they hang out together, looking at their tree, watching birds. Fleur worries about her grandfather’s balls. Turns out she has reason to. She, too, will lose her male protector.

Fleur’s capacity to leap from the sublime to the ridiculous and back in a heartbeat, her resilience, her intelligence, her love for the natural world and its creatures, her strenuous efforts to keep herself amused, alive, stimulated and out of the VOID are heartening signs of what our world needs. And, she has the best vocabulary for a developing girl’s private parts.  If you want to know you’ll have to read her, and become her secret friend, too.

With Hushpuppy and Fleur—and don’t forget Rima of the Jungle—maybe the wild girls will save us.

Here’s a poem of mine about the Wild Girl:

Once this was somebody’s
grandparents’ farm—sweet
as Rebecca of Sunnybrook—
do you remember?  How she skipped
among meadows with wildflowers,
til she was thrown
like a sheep
to the ground,
shorn of her corn, her hay.

But she’s still here, that girl.
You’ll see her playing in the fountains
near Rotten Robbie’s Gasoline
or herding her geese by the Chinese
All-You-Can-Eat Buffet,
while cars zoom past on 680
in sight of the mountain.

You’d think she’d be dead by now—
after all the concrete that’s been poured.
But that girl is
wild as Rima—
talks to the willows, to the birches,
laughs aloud at the ducks
who have commandeered
the community
swimming pool.

And you,
old ecstatic
of trees,
have you forgotten

Green Mansions—that slip
of a girl who first lit
the green fire?

Talk to her—
your wild friend from beyond
civilization—
give her a seat
in the camphor tree
by your study, 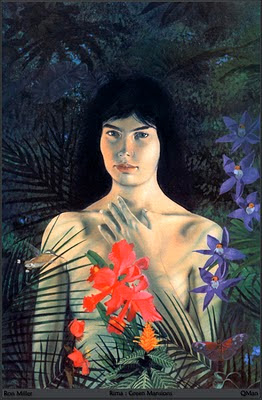