Motherline stories evoke a worldview in which all beings and times are interconnected…They are as common as the repetitive loops made in weaving, crocheting and knitting. They are as powerful as touching a grandmother’s face in childhood, or seeing a daughter suckle her newborn child.

I’ve been reading Patricia Damery’s novel “Snakes” whose narrator is the breast–feeding mother of a plump baby girl. My body remembers the suck of my own babies’ mouths, the sweet breast feeding reverie, the intoxicating smells of baby skin and my own milk. I remember the pleasure and I remember the overwhelm.

The muse would come to me in those days—baby at my breast, on my hip, in the stroller. She’d say: “Why aren’t you writing about this? A mother’s experience is the foundation of everyone’s life? It’s so powerful. Where are the poems, the novels, the essays about this demanding, amazing and transformative experience?”

“When do I have time to write?” I’d lament. I knew the muse was on to something. I felt deprived by the lack of literature about this most profound human experience. This made me edgy and defensive. “The baby is hungry. The baby needs changing. There’s dishes to do, and laundry. There’s dinner to cook. My body belongs to the baby. So does my head. How could I even focus?”

All that has changed in my lifetime, I’m delighted to say. Many women, myself included, have written about the mysteries, joys and sorrows of mothering. I wrote a poem recently, about my problem.

In a peanut butter and jelly haze
in play dough and lego worlds
amidst unmade beds and Mrs. Dalloway
lost in a pile of laundry, all the edges

of your days unraveling, between baby cries
and dinner, between the earth spirit
who has opened you up, and the call
of that angel before you fall…

If there are rainbows
you don’t see them. If songs are singing
they don’t sing to you. If poems are forming
deep in the dangerous woods, you can’t hear them—

Poems are wild things, they’ll eat you up
just like the wolf, your grandmother has warned you—
but somewhere in a grotto, the witch
who has known you all your life, is busy
fermenting her brew…
(first published in Ibbetson Street) 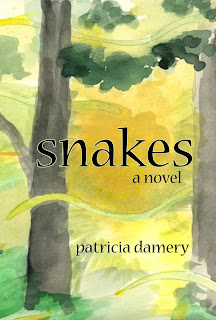 If I could give my confused and disoriented younger self, just one book to read, it would be “Snakes.” Why “Snakes?” Because it would give her courage and hope. She would understand that her way of being and seeing has value and beauty.

Angela, the first person narrator and central character in “Snakes” does not suffer from the problem of my younger self. She is both mother and artist— a weaver. Weaving is her medium and her way of perceiving. Her voice weaves a rich tapestry of many threads: the bodily sensations of her milk letting down when her baby cries, the healthy smell of breastfed baby shit, the emotional trials of parenting two prepubescent boys, her ambivalent feelings toward her visiting, recently widowed mother, her spirited conversations with her dead father, her marital issues and lusty love for her husband, her memories of the small family farm she grew up on and her grief about the loss of that way of life, her meditations on her ancestors, her fear of snakes, her fascination with snakes and the myth she tells her sons about a shape-shifting serpent and his human bride.

“You mean you don’t have to write paragraphs that focus on one thing at a time?” my younger self marvels, remembering red marks all over her creative attempts in college. “You mean you can write about a woman’s gaze, her bodily response to a man’s nakedness? Listen to this:

“Let’s swim,” Jake said, pulling off his clothes. I stood spellbound. His body was lean and forbidden, yet I looked at every muscle, the tautness of his belly, the bulging of his thighs…I watched the curve of his buttocks as he hung midair and then ever so slowly, slipped into deep waters.
p. 85

“You mean you can leap from memory to myth to talking with a ghost to funny family conversations in which big brother calls baby sister “the Leech” to philosophizing about the loneliness and grief of ancestral farmers in the Midwest while writing in plain speech that is accessible and poetic?” My younger self is amazed. “You can loop back and forth in the generations, remembering yourself as a child as you deal with your children and your mother’s response to your mothering? You can weave a Zuni myth about a beautiful maiden who marries the sea serpent Kolowissi into a dialogue with an eleven year old boy?”

“Lived with a snake” Trent used to say. “She married a snake?”
“Kolowissi is a god” I’d explain. “He can take any form. But his favorite is that of a serpent.”
p. 33

“Just like that she weaves the ordinary and the marvelous into one fabric.” My younger self is impressed. She has suffered under the fallacy of categories. I wish she could have known what Angela knows: that all the realms are interwoven. That is how her mind worked. Still does. But back then she thought there was something wrong with her mind, that modalities were supposed to stay in their separate categories like university departments, or milk and meat, according to Jewish Kosher law. This muzzled her, hobbled her, kept her in a mental strait jacket, denied the flow of her thoughts. I wish she could have known what Angela knows—that magic is always present, as surprising and as ordinary as a snake slipping through yellow grasses on a California hillside.
Posted by Dan at 3:49 PM