The Muse of Summer

The Story Behind the Poem
The muse makes weird things happen, excites your passions, moves your soul.
Lowinsky, The Sister from Below, pp. 2-3 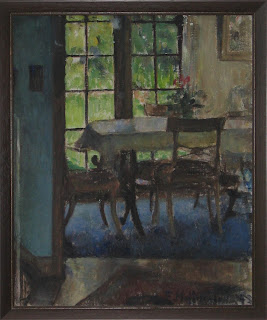 Summer is my season. Summer fruit is a joy. I love it for breakfast. This morning it was glowing Bing cherries, sweet strawberries, a half a golden apricot, a handful of blueberries with my morning yogurt. Our summer garden is a joy. Dan tends the roses. They respond in vibrant yellow, salmon pink, fire orange. He brings bright treasure into the house. The Buddha of the kitchen window sits surrounded by all this color—his eyes closed. Mine aren’t. Dan’s tomatoes are gathering red. Their smell is ecstatic—sends me back to the girl I was, on summer vacation in Vermont—intoxicated by the smell of tomatoes in the sun. Dan feeds the birds. Finches and hummingbirds come, flashing their yellow bellies, their fuschia throats.

Summer is my season, the season of my birth. Summer’s colors and smells take me back to my new baby days in my grandparents’ North Berkeley home. I feel at home in summer, in my body, in light dresses, in my connection to earth and sky. I feel held by the warmth, blessed by the light, until the fog rolls in. Then I complain about what a cold wet blanket the fog is, how it interrupts my summer bliss. Dan, who doesn’t do so well in the heat, is grateful for the fog. And I must admit, there have been a few days, as the earth warms, that I too have welcomed the fog.

It’s not just the fog that intrudes on my bliss. For the summer I was born was war time, Shoah time—a terrible time for the world, for the Jews, for my family. My immediate family had made it out of Europe, and after a period of limbo, had found a home in America. They were haunted by those who did not get out, especially by the ghosts of my father’s parents. The ghosts wove themselves into my earliest sense of the world. They are always with me.

All this sensual delight, this stimulation, this seduction and color, this hot and cold, these ghosts that wander between the worlds, are heaven for a Muse. She thrives on summer fruit and roses, on tree light and dancing shadows, on long reveries in which the ghosts hold forth. She lures me to places I’ve never gone before. She rummages through her dress up box and puts on costumes I’ve never seen. One summer she showed up as Iris, a goddess I‘d never kept company with before. Iris demanded a poem. 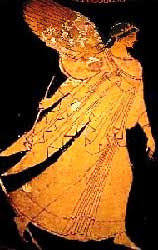 Iris is the rainbow goddess, goddess of color, goddess of vision. She is a flower; she is psychopomp—she bridges the worlds between humans and gods. She is associated with writing, for writing bridges the inner and outer worlds. Some say she has recently appeared to star gazers as a planet. She guides the souls of dead women. No wonder she showed up, demanding her due. She was one of the goddesses present at my birth, and I had not honored her. Here is the poem that came:

(Published in Adagio and Lamentation)

Often my poems take me places I don’t know I’m going, show me inner landscapes, lead me to sacred springs I had not imagined. Sometimes when I read them years later, I understand that they have been prophetic. I suddenly understand my recent obsession with writing poems that respond to my Oma’s paintings. Iris has been engaged in “delicate negotiations” between Oma’s soul and mine. She carries a “box of writing implements” and “draws color out of the glistening air.” Iris bridges the world between writing and painting, between the dead and the living. She is what Jung would call the “transcendent function.” Jung writes:


The process of coming to terms with the unconscious is a true labour….It has been named the “transcendent function” because it represents a function based on real and “imaginary,” or rational and irrational, data, thus bridging the yawning gulf between conscious and unconscious. It is a natural process, a manifestation of the energy that springs from the tension of opposites, and it consists in a series of fantasy-occurrences which appear spontaneously in dreams and visions. Collected Works V. 7, 121

I began my collection of poems “Adagio and Lamentation” with the poem “Oma” in which I invoked her, asked her to “come visit me.” Years later, thanks to Iris’ “delicate negotiations,” she has. It is summer, my season, and I sit in deep conversation with my Oma. I spend hours looking at her paintings, at her oil painting of the “red begonia/ which glowed on the dining room table.” I am sure my baby eyes were transfixed by that flower; I am sure I reached for it with eager hands. In this season of my birth I am given back something of my earliest images, Thanks to Iris and her rainbow walking between the worlds, to the “transcendent function,” to Oma’s skillful paint brush and her willing ghost. 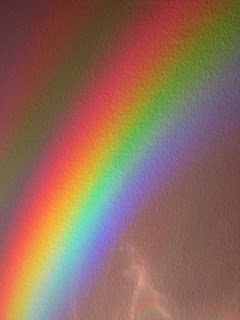